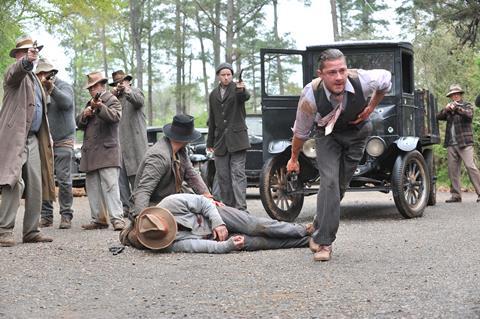 John Hillcoat’s latest movie is a well-paced and entertaining story of bootlegging in 1931 Virginia, skillfully adapted by Nick Cave from Matt Bondurant’s 2008 novel The Wettest County In The World. But if the film will boost Hillcoat’s stock as a commercial director, it is lacking in both the poetry that infused The Proposition and The Road and the mythic quality of many other retro ‘30s gangster pictures from Bonnie And Clyde to The Untouchables.

The story does not give Hillcoat much time for the visual or philosophical explorations that have graced his oeuvre to date.

A superb cast of hot young actors led by Shia Labeouf and Tom Hardy and the clout of The Weinstein Company, which will no doubt push it out wide in the US, will ensure strong initial returns from Lawless. But several factors will hamper its prospects in the US and internationally, from the thick, often unintelligible southern accents to the consistent and graphic violence. It is likely to perform better in arthouses than in commercial circuits, attracting upscale audiences over the teen crowd.

Bondurant’s book is based on the exploits of his grandfather Jack Bondurant and his two brothers Forrest and Howard, a trio of bootlegging siblings who ruled the illegal whisky manufacturing and distribution trade in Franklin County. The film aligns all the drama into one year – 1931 – in the height of Prohibition.

Jack (LaBeouf) is the youngster of the three, desperate to be taken seriously by his brothers and start doing some illegal runs across county lines. Witnessing Chicago gangster Floyd Banner (Oldman) mow down two cops one day, he longs for a piece of the action. Forrest (Hardy), a brooding silent type with a knuckleduster in his pocket and a head for business, runs the show, while Howard (Clarke), a giant of a man damaged in the war and perpetually drunk, is the heavy who protects the operation.

But when a new county attorney decides he wants a piece of the action, he imports an FBI agent called Charley Rakes (Pearce) to make sure all the bootleggers hand over some of their earnings to the police. Forrest won’t play ball, causing Rakes to start a war against the Bondurants. It starts with him beating Jack senseless and continues when two of his men slit Forrest’s throat.

But the Bondurants have a reputation for being invincible. Forrest survives the garroting with a scar and, while he is in hospital, Jack proves his worth by making a delivery to Floyd Banner and scoring a good price per gallon. Meanwhile Jack has his eye on a local girl Bertha (Wasikowska) and Forrest develops a grunting affection for the Maggie (Chastain), the woman who tends his gas station/bootlegging HQ.

Hillcoat moves the drama along at a brisk pace towards the inevitable confrontation between Rakes and his men and the Bondurants. Cave’s screenplay is a superb linear adaptation of a book which is anything but, tweaking facts and timelines to fit the single year scale of the film, while maintaining the key setpieces and rich characters.

The story, however, does not give Hillcoat much time for the visual or philosophical explorations that have graced his oeuvre to date. While Matt Bondurant’s book ached with the pain of Depression and natural beauty of the Virginia mountains, Hillcoat’s film plays it mainstream.

Casting, on the other hand, is excellent. Labeouf shows that he is maturing as an actor in the central role of Jack and Hardy positively oozes charisma as the uber-masculine Forrest, a cardigan clinging at all times to his enormous shoulders. The Howard role is reduced from the book to third fiddle, giving more room for the female characters and both Chastain and Wasikowska demonstrate once again why they are two of the most sought after young actresses of this generation.

Pearce, on the other hand, seems an uncomfortable fit for the Rakes character – an embodiment of several characters from the book. Fine actor though he is, his two-dimensional bad guy here doesn’t work alongside the nuances of the other characters. In fact, the right side of the law doesn’t get a good airing in Lawless which falls guilty of over-glamourising the bootlegging family right through to a corny coda in 1940. Our heroes are the sweetest ruthless killers you ever did see and anyone who comes up against them is evil personified. For all the bloody violence on show here, there is very little danger in evidence for these gangsters.