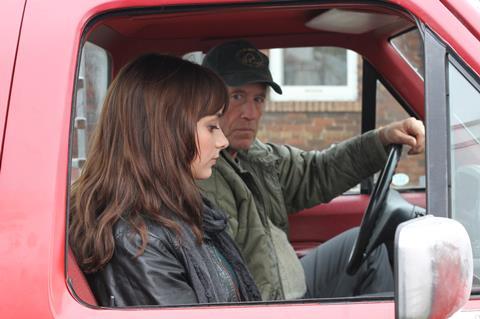 An elegantly simple family farming drama, Canadian film Le Démantèlement is a slow-moving pastoral tale about the end of an era, as a taciturn and genial famer has to make the tough decision to sell off his family farm.

While the first half of the film tends to focus on the pastoral pleasures of the farm, the second is much more focused as Gaby stoically sells his livelihood to make his children happy.

While beautifully shot and impressively performed, it is ultimately perhaps too restrained and muted to break out internationally, but there is much to appreciate in Gabriel Arcand’s subtle and gently moving performance as a man willing to change his life completely in a bid to try and help his family. He moves through the film with stoical grace, bearing the worries of the world on his shoulders as he faces changing everything in his once-settled life.

Shot is bucolic widescreen – with perhaps a little too many lingering and longing shots of the rolling countryside, gamboling lambs and warm summer sunshine glowing through dappled trees – the film is ultimately worth attention thanks to its performances and rather graceful low-key drama.

Weather-beaten, but oddly content, farmer Gaby (Arcand) raises sheep at ‘Le Ferme Gagnon and Sons’, enjoying his slow-moving and modest life. Despite the name of the farm, he has no sons (the farm was established decades before when his father hoped Gaby would run the farm with his two brothers) and his two adult daughters have moved away to Montreal.

He rarely sees his daughters, but clearly adores them. One day eldest daughter Marie (Lucie Laurier) makes a brief visit with her two young sons, and ends up asking for money to try and save her house which she fears may be lost when she separates from her husband.

Gaby decides that the only option is to sell his farm…sell everything that has defined his life, all because he loves his daughter so much. All against the advice of his ebullient accountant friend (Gilles Renaud) – who pops round and installs a computer in the farmhouse much to Gaby’s bemusement – his neighbours; his two brothers (who have never shown any interest in the farm) and even his ex-wife.

Younger daughter Francoise (a sweet performance by Dominque Leduc), an actress, returns to spend time with time with Gaby just as the final auction is being staged. She points out that Marie is taking advantage of him, but he simply comments that he doesn’t care, and that: “…a father needs to give to be happy.”

While the first half of the film tends to focus on the pastoral pleasures of the farm, the second is much more focused (with more interior filming) as Gaby stoically sells his livelihood to make his children happy. The end is rather positive as it sees the two daughters gently smiling – content in the support and love of their father – and even Gaby settling into his new life in a small apartment in the nearby town.