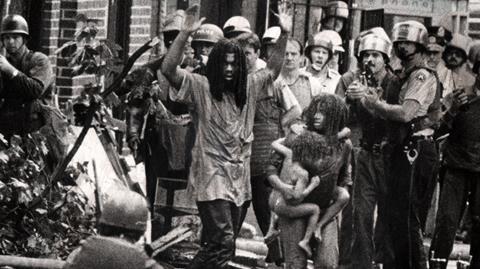 Telling its riveting, despairing tale entirely through archival footage, the terrific documentary Let The Fire Burn examines the events that led to a tragic 1985 confrontation in Philadelphia between police and a local extremist organisation. But this is no musty or preachy history lesson: Director Jason Osder’s deeply thoughtful full-length debut has the force and intrigue of a courtroom thriller, enlivening this nearly 30-year-old incident so that it ripples with urgency and moral complexity.

Let The Fire Burn transcends its era to speak to the troubling issues of class, race and power that still haunt America 28 years later.

Premiering at the Tribeca Film Festival, where it won Best Editing in a Documentary Feature, Let The Fire Burn will benefit from some audience awareness of the real events, although a lack of familiarity actually enhances the documentary’s considerable suspense. Strong reviews should go a long way theatrically, and the movie’s copious use of TV footage will allow Let The Fire Burn to be a natural fit for PBS and cable down the road.

Working closely with editor Nels Bangerter, Osder has organized the film as an investigation into what happened on May 13, 1985, when a militant African-American group called MOVE clashed with Philadelphia law enforcement, who sought to forcibly evict the group’s members from their townhouse after years of hostilities with the police. The ensuing firefight and subsequent blaze ended in the deaths of 11 people inside the house, as well as the destruction of several city blocks.

Structured around the filmed public hearings that took place five months later, Let The Fire Burn also incorporates MOVE-approved propaganda films, live local-news coverage of the May altercation, and recorded depositions. Goosed along by Chris Mangum’s supple, understated score, Osder and Bangerter seamlessly intertwine their diverse footage with the skill of dramatists, grippingly and mournfully building toward the fateful 1985 confrontation as different speakers testify to the mind-set of both Philadelphia law enforcement and MOVE.

Osder mimics the sober, meticulous tone of the hearings, giving the viewer a straightforward sense of how MOVE’s increasingly antagonistic and provocative counterculture movement drew the ire of neighbours and law enforcement. But the more we learn, the more complex the picture becomes. For instance, the combative testimony of two MOVE associates, Louise James and LaVerne Sims, early on establishes the group’s belligerent attitude, but this initial impression quickly leads to a far more complicated audience reaction when later information validates MOVE’s legitimate mistrust of local authorities.

Let The Fire Burn’s final third is its most devastating, as we see the full extent of the mayhem unleashed on that May day through the eyes of those directly involved in the altercation. The evidence suggests that there was plenty of blame to go around, but the filmmakers take pains to avoid editorializing, instead focusing on the failings and humanity of those on both sides of the conflict — not to mention acknowledging the great sadness over the significant loss of life that occurred.

Resisting the urge to include present-day interviews with any of the on-camera subjects — which would have broken the you-are-there intimacy and intensity of the archival footage — the documentary plays like a perfectly preserved time capsule whose contemporary relevance is without question. By calmly and unsettlingly laying out a snapshot of a city’s darkest moments, Let The Fire Burn transcends its era to speak to the troubling issues of class, race and power that still haunt America 28 years later.