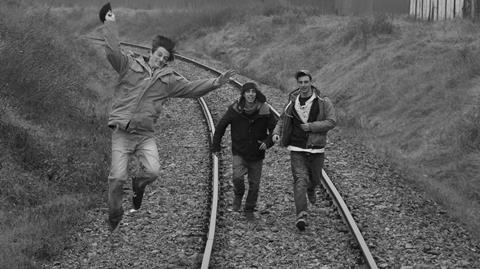 Jury president Jean-Jacques Annaud said that Hristov’s film was “a movie we liked in all aspects – the cinematography [by Emil Hristov], the actors and the direction. We came to an agreement very quickly.”

Produced by Profilm, Losers, which had its world premiere in Moscow, centres on four high school friends in a small provincial town whose lives are changed forever by a visiting rock band.

Looking back on the week, Annaud said that the jury’s deliberations had been “a very easy conversation” and spoke warmly of “an extraordinarily friendly jury” whose members included British actress Jacqueline Bissett, German screenwriter-producer Fred Breinersdorfer, Russian director Alexey Fedorchenko and Argentinian producer Fernando Sokolowicz (who took the place of Andy Vajna).

The jury special prize was awarded to Russian director Irina Evteeva for her first feature-length film Arventur, which was produced by Andrey Sigle’s Proline Film and is handled internationally by Ant!pode Sales & Distribution.

The Silver St George trophy for best director went to the Danish director Frederikke Aspöck for the love triangle Rosita set in a small fishing town in the north of Denmark.

The acting honours this year were presented to Elena Liadova for her performance in Andrey Proshkin’s Orleans and to Kazakh actor Yerkebulan Daiyrov for his role in Zhassaluan Poshanov’s Toll Bar.

Accepting Daiyrov’s award on his behalf, Poshanov said that Toll Bar had been real guerrilla filmmaking “without any budget and the actors working for free!”

Meanwhile, the documentary jury headed by producer-sales agent Philipa Kowarsky awarded its Silver St George to Matthew Heineman’s Cartel Land, described as “a classic western setting in the 21st century, pitting vigilantes on both sides of the border against the vicious Mexican drug cartels.”

The awards ceremony in Moscow’s Rossiya Cinema included a nod to film history with a celebration of the 90th anniversary of Eisenstein’s Battleship Potemkin and a commemoration of the late James Horner, who had composed the score for jury president Annaud’s last film Wolf Totem, which opened the festival on June 19.

And before the ceremony came to a close the inveterate showman Mikhalkov sprung a surprise on Annaud by presenting him with a special prize for an outstanding contribution to world cinema.

At the beginning of the festival Bisset had become the latest recipient of the special prize for the outstanding achievement in the career of acting and Devotion to the Principles Of K Stanislavsky’s School.

Earlier in the day, the internet portal ProfiCinema announced that this year’s People’s Choice Award for the best film in the main competition went to Goran Radovanovic’s Enclave (Enklava).

The film, which had its international premiere in Moscow’s competition, centres on a 10-year-old boy who dares to do the impossible when his grandfather dies in a Serb enclave in Kosovo and the cemetery is outside on enemy territory.

The Serbian-German co-production beat off competition from such films as Bulgaria’s Losers and Japan’s Being Good by Mipo Oh as well as the three Russian films in the main competition, My Good Hans, Orleans and Arventur.

The FIPRESCI Jury bestowed its award on The Road by Lebanese director Rana Salem, while the NETPAC Jury Prize was shared between Arventur and Being Good.

In addition, the Kommersant Weekend Prize was given to Alexander Mindadze for the Russian-UK-German co-production My Good Hans, which had been pitched at a past edition of the Moscow Business Square’s co-production forum.

In a final press briefing, festival president Nikita Mikhalkov revealed that this year’s programme had been seen by 55,000 cinema-goers which, when seen in relation to the number of films shown and the fact that the festival was two days shorter this year, in fact translated into a 10% increase in admissions over 2014.

A total of 307 films were presented in 392 screenings, with 300 foreign guests and more than 6,000 journalists in attendance.

In response to criticism from some quarters in the press about last year’s programming of Transformers as the closing film, Mikhalkov countered, “This year, we opened with a calm and serene film [Wolf Totem] and are finishing with one [Sergio Castellito’s You Can’t Save Yourself Alone].

“I am very happy that I didn’t recognise my press,” he said in a dig at his critics within the press cohorts. “The coverage this year was very humane, respectful and attentive.”

He explained that “the absence of the negative” had been one of the most important features of this year’s festival. “The festival mechanism is working so well that I am not just there solving problems and patching things up, but can actually get to see some films during the festival.”

The only cloud to Mikhalkov’s silver lining was when the Turkish Ambassador in Moscow protested about the special sidebar entitled Screen Image Of Tragedy.Armenian Genocide Centennial, asking for it to be withdrawn or for the section’s name to be changed. Mikhalkov said that he had replied to the ambassador in a letter rejecting any attempt to influence the festival’s programming.

He stressed that he did not want this to affect relations between Turkey and Russia. “Personally, I love Turkish cinema,”Mikhalkov declared, “especially the films from the past 10 years.”

A sidebar dedicated to Turkish Cinema Yesterday and Today had included such titles as Song Of My Mother, The Bride and Mr. Muhsin.

Turning to the question of the long-gestating plans for a new home for MIFF in a purpose-built festival centre, he replied that “real progress” had been made. “We are signing papers, we have investors and contractors in place and hope that the building will be ready for the World Cup in 2018 when it could also be used as a press centre.”

Asked for his personal favourites from this year’s programme, Mikhalkov mentioned such titles as Joshua Oppenheimer’s The Look Of Silence – screened in the Free Thought documentary programme –  Jafar Panahi’s Golden Bear winner Taxi and Zvonimir Juric’s Croatian-Slovenian co-production The Reaper, which were both shown in the 8 1/2 Films sidebar.