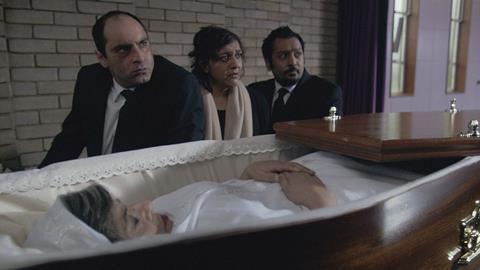 A micro-budgeted UK indie, this quirky-comedic depiction of a second-generation Asian family falling apart at the seams is a puzzling debut from Avie Luthra. Tonally at odds with itself, Mad, Sad & Bad cuts some new thematic ground in the UK, but not particularly adeptly.  Lined up for release at home through Soda Pictures, it may attract fans of stars Meera Syal and Nitin Ganatra, but international exposure seems limited and ancillary will be a challenge outside the diaspora.

Deliberately, often ponderously, quirky, Luthra’s film is to be lauded for avoiding obvious political traps, but neither is it anchored by any dynamic narrative thread. Parts of it impress – Syal is lovely to watch, and Ganatra’s segments flow easily enough – but Luthra’s air of studied whimsy doesn’t always come off. (An opera about cheese might work as a one-liner, but Luthra pushes the camembert gag a fromage too far.)

Much like another recent cross-cultural misfire, the Chinese-American Dim Sum Funeral, Mad, Sad & Bad kicks off with the death of the family matriarch whose siblings are in the grips of varied neuroses. Flash back “several weeks”, and it becomes clear that older son Hardeep (Varla) is a cruel, sex-crazed shrink; Rashmi (Syal) is a depressed spinster living at home with her domineering, vodka-swilling mother, and Atul (Ganatra) is a TV soap writer, living with sculptor Julia (Riseborough). Atul wants to be taken seriously but isn’t sure how to go about it; romantically, he’s having a mid-relationship crisis.

Problematic with the Atul/Julia segment is that Riseborough, an accomplished actor, pitches her performance at a completely different level to her co-stars. This spills over to the less-developed Hardeep strand when she becomes his patient.

There’s pleasure to be had, though, from watching Syal come to terms with her domineering mother and trying to find a life for herself.

Amusing in parts, Mad Sad & Bad – shot “on location in the East of England” according to the credits – never quite finds its tone. Technically, it’s competent. “Is this so bad it’s good?” asks one of the characters. It’s neither really, and Luthra’s camera tends to agree, panning to the sky for inspiration when all else fails.