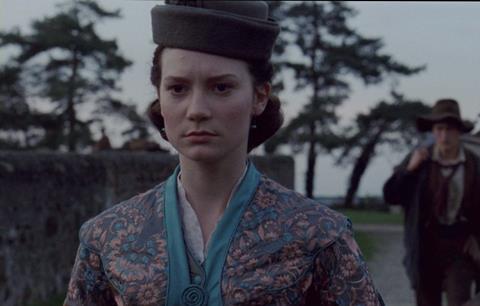 Gustave Flaubert’s once scandalous 1856 novel has defeated many an experienced director from Vincente Minnelli to Claude Chabrol. In only her second feature, Cold Souls director Sophie Barthes wrestles a refined, languid period drama from the novel that is not without its flaws but impresses with its fastidious attention to detail, craftsmanship and oppressive atmosphere.  It may lack the emotional intensity that the material might suggest but there are enough elements here to attract lovers of period dramas and adaptations of the classics.

In the end, this Madame Bovary, like so many others, is unlikely to stand as the definitive version of the Flaubert text but it makes an honourable, beautifully crafted attempt to understand a woman crushed by the morality of the times and her unrealistic expectations of the world.

Barthes and co-writer Felipe Marino have extensively condensed the novel, stripping away a considerable amount of the attention devoted to Charles Bovary and narrowing the focus to Emma, played by Mia Wasikowska. The film begins as Emma staggers through the autumn woods, clutching her sides in agony as a lethal dose of poison works its way through her system. The whole film is a flashback recounting the events that have led to her tragic ruination.

Barthes quickly covers the young Emma’s convent education and arranged marriage to Charles Bovary (Henry Lloyd-Hughes). Described as a ” good man and a good doctor”, the gravely handsome Charles is also a man of set routines and modest ambitions. When hot baths and embroidery are the only distractions to fill a long day, time begins to weigh heavily on Emma as she discovers that marriage brings none of the excitement, adventure or giddy romance that she had anticipated. She takes comfort in lavish spending on frocks and furnishings before seeking more dangerous diversions in the form of law student Leon (Ezra Miller) and subsequently the seductive cad Marquis d’Andervilliers (Logan Marshall-Green).

The production design and cinematography build a convincing picture of a stultifying existence confined to dark, gloomy rooms occasionally brightened by the flicker of a candle. Even the constant noise of a clock becomes oppressive in such spaces as life literally ticks away. There is a constant sense of the physical and emotional suffocation that Emma feels as the shortest of walks brings her to the boundaries of the town of Yonville. Costume designer Valerie Ranchoux deserves particular mention for a series of exquisite ball gowns and outfits that confirm Emma’s intention to be thought  a lady of means and good taste as she starts to live well beyond her husband’s means. The rich, bold colours and patterns seem to reflect an increasingly reckless nature.

Despite dispensing with the early sections of the book focusing on Charles, he stills emerges as the most sympathetic character in this adaptation. There is a sense of decency in Henry Lloyd-Hughes unshowy performance that is very appealing. Mia Wasikowska is not afraid to make Emma completely unsympathetic. She is an extravagant, selfish creature ruled by desire. The banalities of everyday existence bore her and society’s rules begin to feel like a personal assault on her liberty and pursuit of happiness. It is a strong, stern performance but one that feels less assured as Emma becomes more unhinged.

A multi-national cast includes Paul Giamatti as pharmacist Homais and Rhys Ifans as the snake-like merchant Monsieur Lheureux. The fact that they all speak English in their native accents is jarring, especially when Emma’s father is played by Dardenne brothers regular Olivier Gourmet speaking English with his native Belgian accent. You wonder how he could have produced a daughter who speaks like Mia Wasikowska.

In the end, this Madame Bovary, like so many others, is unlikely to stand as the definitive version of the Flaubert text but it makes an honourable, beautifully crafted attempt to understand a woman crushed by the morality of the times and her unrealistic expectations of the world.

Screenplay: Sophie Barthes, Felipe Marino, based on the novel by Gustave Flaubert