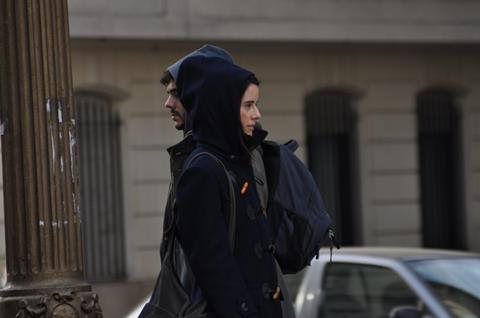 A sweet, slight romance for the Internet age, Gustavo Taretto’s debut feature is an appealing if low-key affair, distinguished by some beautifully fluid framing of a built-up Buenos Aires. Destined for small-scale arthouse play, Medianeras - which plays like Duck Season meets Shopgirl - bodes well for the future career of award-winning shorts director Taretto.

But Buenos Aires is the real star of Medianeras.

A little too self-consciously cute to be fully compelling, Medianeras (a local term for a wall between two buildings) - screening in Berlin in Panorama Special - like its protagonists, shyly engages the viewer’s attention. Visuals help Taretto underscore his theme of human failure to connect in the internet age; of claustrophobia in a built-up city.

His images of the haphazard tower blocks of Barrio Norte, criss-crossed by the wires of energy and information flow, truly convey a sense of what it’s like to live as a Porteno - residents of Buenos Aires, the people most likely to seek therapy in the world.

In an extension of Taretto’s 2005, 28-min short of the same name, Martin (Argentina’s Javier Drolas) and Mariana (Spain’s Pilar Lopez de Ayala) live across the street from, and are evidently destined for, each other. Both are neurotic; computer programmer Martin is a recovering agoraphobe; architect-cum-window dresser Mariana is phobic about elevators recovering after the break-up of a long-term relationship.

Her most meaningful relationship is with her mannequins; he has a brief sexual interlude with a dog-walker, more interested in connnecting with her mobile phone than with him.

Mariana and Martin punch windows into their shoebox apartments; they go swimming in the same pool; they pass each other on the street. Wistfully funny, with its references to children’s book Wally (lost In The City here), Medianeras struggles to make the 95 minute mark, and a final song to camera (which seems as if it should run over the credits but, bizarrely, doesn’t) needs to be rethought.

Both leads are sympathetic; the beautiful Lopez de Ayala, who made such a strong impression in Juana La Loca, is surprisingly credible as a slightly bedraggled woman struggling to come in from the edges of society, and her performance should see this play well in co-production territory Spain. Javier Drolas extends the role he took in Taretta’s earlier short with easy familiarity.

But Buenos Aires is the real star of Medianeras. You can see why Taretto kept coming back to extend his short - there’s something here, and it’s the city, with its unique architecture so distinctly shot by Leandro Martinez. It has an effect on its inhabitants, and on the viewer, even as Taretto scrapes the barrel at times to stretch his accompanying screenplay to feature length.