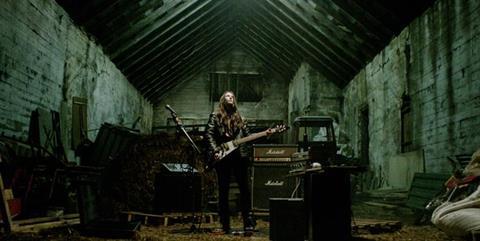 Heavy metal music as the catalyst and cure for the woes of a grief-stricken young Icelandic woman, the beautifully shot and engagingly noisy Metalhead is a curious blend of heavy metal and comic-drama, that ends up being rather oddly enjoyable.

Despite its music orientated titled, Metalhead is at heart a gently moving film about dealing with grief, all set against the most striking of Icelandic backdrops.

Icelandic filmmaker Ragnar Bragason (Children, Parents) crafts some beautifully structured shots that make great use of the stark Icelandic scenery a he tells the story of Hera (Thorbjörg Helga Dýrfjörd), who, as a young girl witnessed the accidental death of her brother Baldur, a heavy-metal fan, and who redefines herself in his image, much to the bemusement of her parents.

Wearing his clothes, playing his guitar and listening to metal as loudly as possible her grief is expressed by living in his image. But now a grown women her acts of rebellion (getting drunk and stealing a tractor from a nearby farm) are not as funny as they used to be, and she starts to get more and more destructive.

While her parents try to sort out their own issues about leaving the memory of their son’s death behind, Hera constantly pushes the envelope. She thinks she may find a kindred spirit with the new local priest who also happens to be a metal fan, but he rejects a sexual relationship prompting her to set fire to the church. But the stoical Icelandic community still gathers round Hera and her family, and in a passage from Witness they all come together to rebuild the church.

There is a happy ending – of sorts – when her self-produced metal music makes it ways to a small group of fans, and three enthusiasts arrive at her home wanting to make music with her. In a delightful moment they play energetic death metal to the bemused village community, before Hera finally make the move away from her home and from the memory of her brother.

Lead actress Thorbjörg Helga Dýrfjörd gives a fearless, bold and moving performance as Hera, beautifully accompanied by a strong veteran cast, including Ingvar E. Sigurdsson (Jar City). Despite its music orientated titled, Metalhead is at heart a gently moving film about dealing with grief, all set against the most striking of Icelandic backdrops.