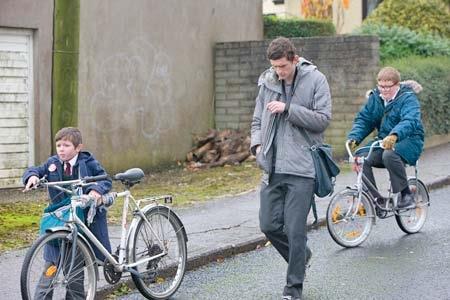 In his screenplays for British director Shane Meadows, Fraser demonstrated his feel for provincial working-class environments. In My Brothers, his directorial debut, he transposes a similar sensibility to a small Irish community over Halloween weekend, 1987. Three brothers - Noel (Creed), age 17; Paudie (Courtney), 11; and Scwally (Griffin) aged eight - take to the road in a stolen bakery van to replace the cheap Casio watch prized by their dying father; the eldest had surreptitiously slipped it off the man’s wrist so he would have a memento after the man’s passing.

In spite of its sad undertones, the film should appeal to audiences in Ireland and Britain, and to a lesser extent, attendees of specialised cinemas in other English-language territories.

Unbeknownst to their parents, they head toward the proletarian beach resort, Ballybunnion, where the family had vacationed years before (home footage of that happy trip brackets the pathos of the journey) where Dad had won the watch playing an arcade game.

In spite of its sad undertones, the film should appeal to audiences in Ireland and Britain, and to a lesser extent, attendees of specialised cinemas in other English-language territories such as the US, Canada, and Australia. The dialogue and nuances are particularly Irish, so that subtitles might diminish the film’s strong cumulative impact, but specialised distributors might find an urban niche.

Bone thin, hollow-cheeked Noel, almost a surrogate father to his brothers, is shy, bullied at school, and prematurely world-weary. A quiet but angry journal he keeps, which chronicles his negative feelings toward his father and siblings as Dad’s condition deteriorates, helps structure the film and provides it with one of its strongest scenes (one brother runs off with it and, unaware of its tone, reads it aloud to a shocked group of girls); the strongest narrative thread in fact involves Noel’s coming to terms with his family.

Asthmatic Paudie is fat, bespectacled, flatulent, and slow. Cute Scwally finds refuge from his father’s impending demise in paraphernalia and dialogue from Star Wars; he just shuts down when anything disturbing occurs around him.

During their trip, the boys’ fight and tease one another, and joke around. The two older siblings endure crises of sexual maturation. In some lovely sequences, Noel has his eyes on two different girls, most notably in a rural pub where the boys must spend the night after the van stops functioning. In one egregious scene, however, Paudie is approached by a slick child molester, the only person in the film who shows flair in case we don’t read the situation correctly—and that is not all he shows.

Throughout the movie the leitmotif is breakdown, the watch being the most obvious example, but also including the van, the arcade game, a dying whale they encounter on the beach in a moving night scene, and their dad himself. The device works; less successful is the tedious repetition of something anticipated in earlier in the screenplay; for example, a special education student asks Noel how to spell “mechanic,” and later the three boys end up for their eventful overnight stay in the pub because they are looking for a mechanic.

Humor is never far away from the film’s melancholy mood. A running gag, for example, is the inability of the van’s doors to open properly. The hilly agricultural landscape of assorted greens in the Irish countryside is seductive, and Fraser does a fine job of honing in on objects and characters’ faces with close-ups. With screenwriter Will Collins, he also reveals a keen understanding of the way young people think and act. The film has an excellent music track by Lightbody and Lee, frequently featuring light guitar and soft rock songs like “Takin’ It Easy.”