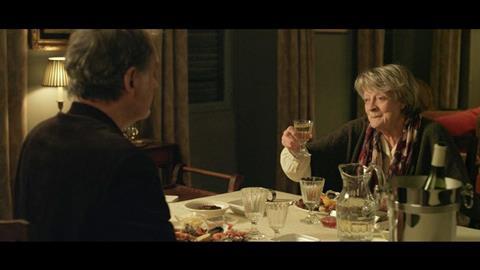 When your cast is lead by Kevin Kline, Maggie Smith and Kristin Scott Thomas you are already half way towards home as an irresistible attraction for the older Exotic Marigold demographic. My Old Lady easily makes the full distance thanks to a witty script and some smooth storytelling from veteran playwright turned filmmaker Israel Horovitz. A prolific playwright and screenwriter, Horovitz has adapted his 2002 play for the screen and also makes his directorial debut at the age of 75.

The dramatic heft may feel a little light to some viewers but it is still hugely engaging and perceptive about the way one person can have a very different identity and presence in the lives of everyone close to them.

An enjoyably tangled tale of guilty secrets and family ghosts, My Old Lady is notable for the way that Horowitz encourages his starry cast to act the humanity of their roles rather than merely expecting them to play to the crowd with yet another variation on fully established screen personas. The target audience should welcome this as a civilised and satisfying drama.

Mathias Gold (Kevin Kline) arrives in Paris believing he has found a solution to the many problems in his life. An alcoholic who has been divorced three times and has neither a dollar, nor a friend he can call his own, Mathias has inherited a vast apartment and gardens in Le Marais from his late father. His plan is sell the property and make the most of his newfound solvency.

The hitch is the current tenants of the apartment Mathilde (Maggie Smith) and her daughter Chloe (Kristin Scott Thomas). A French viager means that Mathias is unable to sell the property until Mathilde dies. That fact that she is 92 gives him some encouragement. Taking up residence in the apartment allows Mathias to befriend Mathilde and learn more about a connection to his father that stretched back over decades.

A good deal of the inspiration for My Old Lady seems to lie in Philip Larkin’s famous observation that ” they fuck you up, your mum and dad.” Mathias’s stay in Paris becomes an intense therapy session in which we learn of a life at the mercy of his father’s actions and his mother’s sadness. What begins with the light, cut and thrust banter between this American in Paris and his wary, often resentful hosts becomes more dramatic and soul-searching as it unfolds.

Kevin Kline brings out all the defensive wit and pain of Mathias, relishing the eloquent precision of Horovitz’s dialogue and bringing a subtle touch to an actor’s challenge of some drunk scenes. Maggie Smith is equally invigorated by the role that offers much more than another imperious, acid-tongued grande dame. The indomitable Mathilde has wit and wisdom but is a flesh and blood character who is central to the story rather than spicy relish on the side.

Kristin Scott Thomas is given a less showy role that comes into its own as we realise how much Chloe has spent her life in the shadows of her mother, burdened by a guilt that no child should have to carry.

My Old Lady probably carries no great surprises and may be a little too tidy in the way it ties up a collection of loose threads and so easily achieves reconciliation from so much pain and suffering. The dramatic heft may feel a little light to some viewers but it is still hugely engaging and perceptive about the way one person can have a very different identity and presence in the lives of everyone close to them.