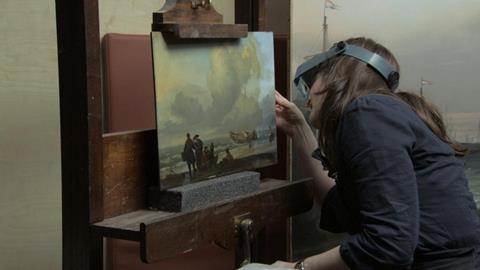 Having covered in the course of his long career practically every issue in sight, from jails (Attica) to madhouses (Titticut Follies) and from National Theatres (La Comedie Francaise) to cabarets (Crazy Horse) and then pretty much everything in between, it was only a matter of time before documentary filmmaker extraordinaire Frederick Wiseman would reach the museum world.

Choosing to point his camera at the National Gallery over the much larger Louvre, Prado or Metropolitan mastodons, allowed Wiseman easier access to all the numerous activities involved in such a complex operation.

Nothing if not thorough in his approach, he once again uses his austere trademark “fly on the wall” technique, systematically refraining from any narration, interviews, inter-titles or any other kind of device that might clutter the soundtrack or the image beyond the absolutely necessary, or God forbid, suggest the report is anything but perfectly objective.

Having obtained the permission from London’s National Gallery for a museum opus, he went for about three months, shot 170 hours of footage which he pared down to three, every minute of it packed to the gills with the kid of information any enlightened art amateur, - which is Wiseman’s definition of his own self as well - would want to know.

The film’s main course, naturally, are the works exhibited in the museum and their presentation. And there is plenty - a vast, gloriously photographed display of the Gallery’s possessions, accompanied by fascinating interpretations and clarifications offered by the Gallery’s curators and guides, all of whom, sadly enough, remain anonymous in this film. Enlightening discourses like the ones offered here on Rubens’ Samson and Delilah, Vermeer’s Young Woman At The Virginal, Poussin’s Triumph Of Pan or Velasquez’ Christ In The House Of Mary And Martha, to mention just a few, deserve to be credited, but then, that would have been a desecration of Wiseman’s basically ascetic approach to the documentary.

But Wiseman’s meal offers plenty of side dishes as well. Once he moves behind the scenes, to the back rooms and workshops, the results are no less fascinating then the showrooms, but again, everybody there remains uncredited. The restoration of Rembrandt’s Portrait Of Frederick Rihel On Horseback with an X ray photo revealing a second layer hidden behind the painting, is given ample space. And so are the rest of the details referring to the art of restoration, among them the information that whatever is done to a painting in order to bring it back to life, is always done on an external layer of varnish which can be washed off in a matter of minutes, allowing future generations to try and do an even better job of it.

Choosing to point his camera at the National Gallery over the much larger Louvre, Prado or Metropolitan mastodons, allowed Wiseman easier access to all the numerous activities involved in such a complex operation. He follows guided tours and eavesdrops on the guides, watches exhibitions being prepared, lighting being tuned up for every exhibit, looks into the frames workshop, then walks into offices and listens to budgets and allocations being discussed, to proposed ways and means that will improve the Gallery’s visibility and develop its accessibility to a large public and to various PR schemes intended to increase the Gallery’s popularity, some of them not all of them quite right for such an institution.

Finally, bowing to the fashion of marrying arts in inter-disciplinary events, Wiseman throws in a pianist playing a Beethoven sonata, a poem dedicated to Tizian’s Diana And Callisto, which had been exhibited in the National Gallery a couple of years ago, and ends on a ballet recital commissioned for the same occasion.