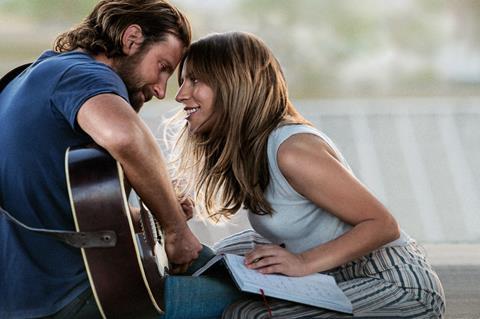 A Star Is Born posted a sensational second weekend hold, repeating its £3.1m opening with a 0% drop. Including midweek takings and previews, the film has moved to £9.6m.

While the film has been boosted by strong word-of-mouth and critical reaction, one further explanation for that result is that the UK’s third biggest multiplex chain, Vue Cinemas, didn’t play the film in its opening weekend due to a disagreement over bookings terms. However, that dispute was resolved at the end of last week, and the film played in all 89 Vue sites this weekend. In total, the film played in 612 cinemas this weekend, in contrast with 537 in its opening session.

Feature animation Smallfoot tapped into the UK’s strong family market for its debut, delivering a result of £2.3m from 556 sites. Featuring a voice cast including Channing Tatum, James Corden and Zendaya, the film tells the story of a yeti that is convinced that the elusive creatures known as “human” really do exist.

Smallfoot is an original property, so the Storks comparison makes sense and as such its opening is in line with expectations. The UK is currently a good market for family animations, and with the only real competition currently being The Incredibles 2 and Hotel Transylvania 3, both of which are reaching the back end of their runs, Smallfoot could yet have a long tail.

Johnny English Strikes Again added a further £2.9m this weekend, a drop of 41% on its first session. Including midweeks takings, the film is up to £8.3m to date, and still has a fair way to travel to reach the totals of its predecessors (£19.7m for Johnny English and £20.7m for its sequel).

Damien Chazelle’s Neil Armstrong biopic First Man, starring Ryan Gosling as the first man on the moon, opened to £2.4m from 590 locations this weekend, an average of £4,068.

Clergy (Kier) set a record this weekend by posting the highest opening ever for a Polish-language production, grossing an impressive £1m from 239 sites.

Bad Times At The El Royale, Drew Goddard’s mystery thriller about seven strangers meeting at a rundown hotel with a dark past and starring Chris Hemsworth and Dakota Johnson, got underway in the UK with a soft £491,474 from 394 sites, an average of £1,254.

Mandy opened to £30,556 from eight sites this weekend.