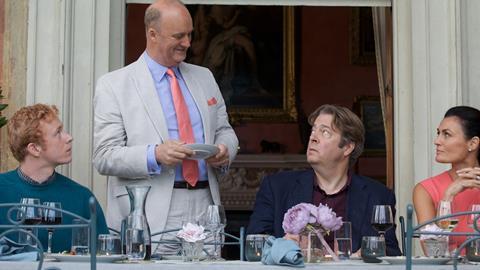 John Jencks’ completed comedy The Hippopotamus, based on Stephen Fry’s novel and taken on from Metrodome’s former sales slate, stars Roger Allam, Matthew Modine and Fiona Shaw in the story of a disgraced poet seeking redemption at a friend’s country estate.

Debut writer-director Josef Baar’s comedy, Dateless, adapted from from Tibor Fischer’s novel The Collector Collector, follows a lonely heart art authenticator who finds love with an ancient bowl. Her peace is shattered when she is overrun by collectors who all want a piece of the artifact.

In post-production, the company has UK fantasy-action film The Gaelic King. Set in war-torn 800AD Scotland, the film tells the story of warrior-king Alpin Mac Eachdach. When his young brother is captured, Alpin must hunt the kidnappers though a dark forest that hides an ancient evil.

Jesse Holland and Andy Mitton’s supernatural thriller We Go On gets a market screening at the AFM while the company has also hired Jennifer Dawson as head of international servicing.