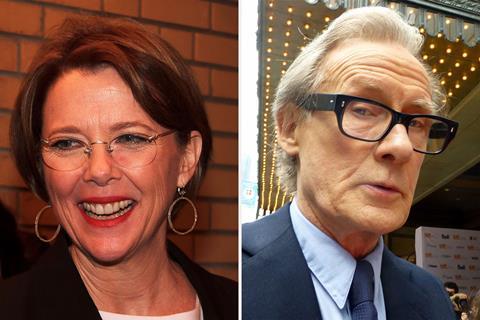 Annette Bening and Bill Nighy will star in Hope Gap, written and directed by William Nicholson, it was announced today (31 Oct) by Protagonist Pictures.

Nicholson wrote the Oscar-nominated scripts for Gladiator and Shadowlands, as well as Breathe, which opened this year’s London Film Festival. It is his second feature as a director after 1997’s Firelight with Sophie Marceau.

The family drama is currently in pre-production with principal photography set to begin in Summer 2018. David M. Thompson (Woman in Gold) of Origin Pictures produces.

Protagonist is handling international sales with North American sales co-repped by CAA and Protagonist. They will introduce Hope Gap to buyers at the upcoming American Film Market.

Bening and Nighy play married couple Grace and Edward. When their son Jamie comes to visit for the weekend at their seaside home, Edward informs him that he plans to leave Grace. Hope Gap tracks the unravelling of three lives, through stages of shock, disbelief, anger and resolution.

Protagonist CEO Dave Bishop said: “Not only are Annette Bening, Bill Nighy and William Nicholson some of the most gifted film talent working today, they are also some of the most beloved. We cannot wait to help bring their cathartic take on embracing shifting family dynamics to their legion of fans worldwide.”