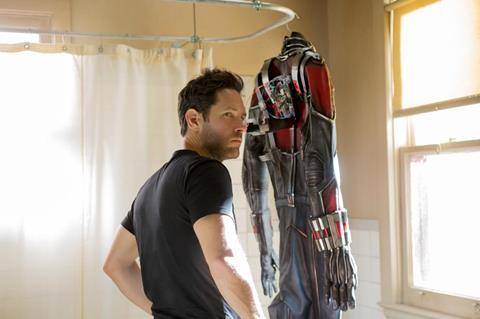 Marking the first non-Universal number one since Spy over the June 5-7 weekend, Ant-Man has continued Marvel’s run of top spot debuts.

Given its strong critical response, Ant-Man could be well-set for a lengthy run and will be looking to challenge the final results of Iron Man ($27.1m/£17.4m) and Captain America: The Winter Soldier ($29.7m/£19.1m).

They may not be top of the chart, but Universal has still set another record as it became the first distributor to have four films hit £30m in a calendar year.

Also for StudioCanal, 13 Minutes posted an opening of $20,000 (£12,572) from its 17 sites, marking director Oliver Hirschbiegel’s lowest-ever UK debut but it’s worth noting that it received his smallest release, site-wise.

This week sees a saturation release for Disney’s Inside Out, while Metrodome’s Eden, Entertainment’s Southpaw, Vertigo’s Maggie and Icon’s Edinburgh opener The Legend of Barney Thomson all receive wide releases.