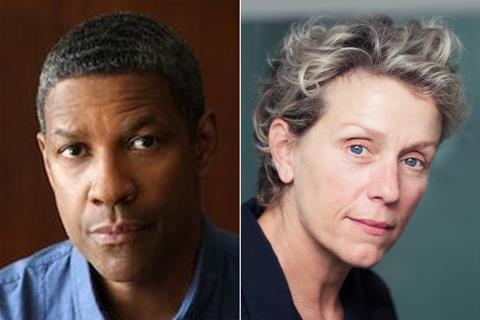 Apple Original Films is partnering with A24 on Joel Coen’s The Tragedy Of Macbeth, throwing its weight behind a top-drawer awards prospect in what is shaping up to be a highly competitive season.

Denzel Washington and recent double Oscar winner Frances McDormand (Nomadland) star in the Shakespeare adaptation as the Scottish lord and his ambitious wife Lady Macbeth who wants to put him on the throne.

The film will open theatrically around the world later this year ahead of a global Apple TV+ launch, and marks the latest prestige addition to Apple’s awards roster alongside Sundance hit CODA, and Tom Hanks sci-fi Finch (formerly Bios).

The Tragedy Of Macbeth marks the first solo directorial outing by Coen (without his brother Ethan), who also produces alongside McDormand and Robert Graf.

The project has high pedigree. Besides McDormand, Washington has won Oscars for Training Day and Glory, while Coen has four Academy Awards, for producing, co-directing and co-writing No Country For Old Men, and co-writing Fargo.

Apple Original Films has Martin Scorsese’s crime drama Killers Of The Flower Moon with Leonardo Dicaprio in production in Oklahoma, while it is understood runaway-slave thriller Emancipation from Antoine Fuqua starring Will Smith is about to start shooting in Louisiana. It is not known if those films will be ready in time for an awards season launch.

Apple Original Films and A24 have worked together on Sofia Coppola’s On The Rocks; Sundance grand jury prize winner Boys State; and upcoming young-adult adaptation The Sky Is Everywhere from Josephine Decker and starring Grace Kaufman, Cherry Jones and Jason Segel.