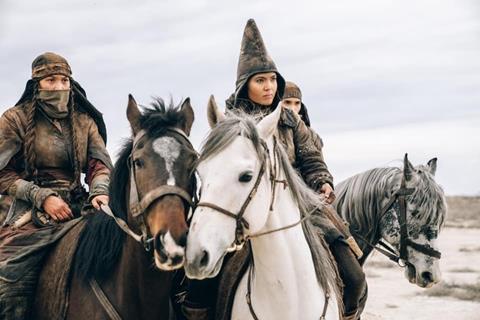 Akan Satayev (The Liquidator) directed the epic about Queen Tomiris, the central Asian warrior who some 2,500 years ago united nomadic tribes to repel invading armies from Persia.

Kazakh actors Almira Tursyn and Aizhan Lighg star and performed their own stunts.

The film is a co-production between Kazakhfilm Studios and Sataifilm. It got a theatrical release in Kazakhstan on October 1 last year when it became one of the highest-grossing films in the country’s history.

“We are grateful to live in a world where there is a strong appetite for real-life stories of powerful women, stories that deserve to be told,” said Hamilton. “Tomiris tells one such story, and coupled with its exquisite landscapes and exceptional production values, it is an epic film that will enthrall audiences.

“When Kazakh-American film producer Gia Noortas (and head of the honorary consulate of Kazakhstan in Los Angeles) introduced us to this special project, we immediately recognised the extraordinary potential of this film. We are thrilled that our friends at Well Go USA are on board to bring the inspiring story of Queen Tomiris to US audiences.”

“We have a passion for incredible stories, and few are more compelling than the almost unfathomable life story of the first historical ‘Queen of the Amazons,’” said Well Go USA president and CEO Doris Pfardrescher.

“Tomiris viewers will be left awe-struck by this fierce young warrior, who embodied such strength and unwavering love for her people that she overcame great tragedy to protect them at all costs, even when it meant waging war against the most powerful empire the world had ever seen.”