Asian triumph at the Berlinale 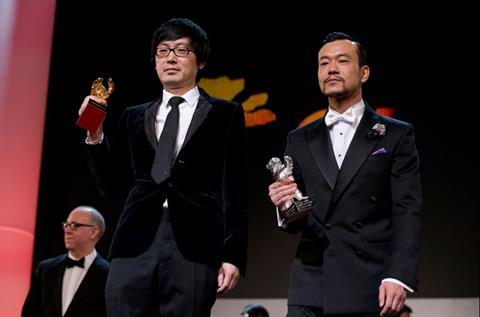 Another of the three Chinese titles, Blind Massage, picked up the Silver Bear for Outstanding Achievement, which again went to a cinematographer, Zeng Jian. Last year had seen DoP Aziz Zhambakiyev receive the prize for his camerawork on Harmony Lessons.

At the ceremony on Saturday night, the Silver Bear for Best Actress was presented to Haru Kuroki for her performance in The Little House by veteran Japanese director Yoji Yamada.

There were a further six prizes or special mentions for films from Asia in the decisions of the Generation and independent juries (FIPRESCI and NETPAC).

Black Coal, Thin Ice is the fourth Chinese film to win the Golden Bear in the Berlinale’s 64-year history following Red Sorghum in 1988, Woman Sesame Oil Maker in 1993 - which shared the prize with the Taiwanese-US production The Wedding Banquet produced by this year’s International Jury president James Schamus - and Tuya’s Marriage in 2007.

The International Jury’s choice of Diao Yinan’s thriller for the Golden Bear provoked some consternation in the auditorium and heated discussions in the foyer afterwards, although the festival’s new Chinese main partner Tesiro would have been happy with the evening’s proceedings.

Yann Demange’s ‘71 had been tipped as one film which might receive the honour. After all, Paul Greengrass’ Bloody Sunday on the Troubles in Northern Ireland - also the focus of ‘71 - had shared the Golden Bear at Dieter Kosslick’s first Berlinale in 2002.

Richard Linklater’s Boyhood would have been a popular choice, in line with Screen’s International Jury of critics.

Linklater did win the Silver Bear for Best Director and had been feted by the audience at the Independent Juries awards ceremony earlier in the day when he picked up the Guild of German Art House Cinemas Prize - 19 years after he received the same prize in Berlin for Before Sunrise - and the Berliner Morgenpost Readers’ Jury Award.

The US director said that the Art House Cinemas Prize meant a lot to him since he and friends had launched a film society in his home town of Austin, Texas and now run a cinema there.

“Independent theatres and the theatrical experience are the lifeblood of cinema, and this is a challenge worldwide today,” he said.

In a spontaneous gesture, German producer Fabian Gasmia of Detailfilm, offered Linklater the chance to screen his co-production The Lamb by Kutlug Ataman, which won the CICAE Art Cinema Award for best film in the Panorama.

Another critics favourite, Stations of the Cross by Dietrich Brüggemann, received the Silver Bear for Best Script, but Brüggemann appeared to be visibly disappointed that this would mean that the film - scripted with his sister Anna - would not now be in contention for the evening’s highest honour.

Earlier in the day, the film had received the Ecumenical Jury’s award for best film in Competition.

There was also some surprise at the choice of the French director Alain Resnais as recipient of this year’s Silver Bear Alfred Bauer Prize “for a feature film that opens new perspective” for Life Of Riley, his third adaptation of a work by the British playwright Alan Ayckbourn.

Accepting the prize on behalf of Resnais, his producer Jean-Louis Livi said this recognition by the jury was most fitting since the director “is a world champion in innovation - and that at the age of 92”.

The Silver Bear Grand Jury Prize went to Wes Anderson’s The Grand Budapest Hotel, which opened the festival on Feb 6.

In a message read out by jury member Greta Gerwig, Anderson said that the Silver Bear was “the first full-scale, genuinely metallic prize I have ever received from a film festival”.

The Best First Feature Award, sponsored by collection agency GWFF with a cash prize of €50,000 ($68,500), was presented to Güeros by Alonso Ruizpalacios.

Reading his notes written on the back of a ticket to Legoland, Mexican filmmaker Ruizpalacio quoted Bob Dylan and thanked “the artists in Mexico who, despite its ruler’s efforts, keep the country from falling apart”.

Berlin’s Komische Oper was the setting for this year’s 28th Teddy Awards, held the night before the Official Competition prize-giving.

The Teddy for Best Feature Film went to Brazilian film-maker Daniel Ribeiro’s debut feature The Way He Looks, which is being handled internationally by Films Boutique.

The Special Jury Award went to Bruce LaBruce’s Pierrot Lunaire which the jury described as “a significant addition to his oeuvre”. The title, screened in the Forum Expanded sidebar, is being handled internationally by Raspberry&Cream.

Special Awards for Lifetime Achievements were presented to two pioneers of queer cinema including director-DoP Elfie Mikesch whose her latest feature Fever (Fieber), starring Eva Mattes and Martin Wuttke, screened in the Panorama.

The second was filmmaker and “national treasure” Rosa von Praunheim who attended this year’s Berlinale with his latest short film, Mario Wirz, which also debuted in the Panorama.

Kroske’s Heino Jaeger - Look Before You Kuck won the Golden Dove at DOK Leipzig in 2012.

The Residency programme is organised by Berlin-based Nipkow Programm and supported by Medienboard Berlin-Brandenburg, the German Federal Film Board (FFA), the collection agency GWFF, and the Israel Film Fund.

Actress Sophie Rois and actor Christopher Buchholz, who also serves as the director of the French Film Days in Tübingen, were named Chevalier des Arts et des Lettres during a Soirée Francaise.

The German Actors Association BFFS distributed awards in a gala ceremony in Theater des Westens to acting performances in such films as Nothing Bad Can Happen, Oh Boy, and Finsterworld as well as the Weißensee TV series.

As preparations were made for Saturday’s awards ceremony, the festival announced that the number of tickets sold to the general public had reached 330,000 - a new record in the Berlinale’s 64th history.

The city of Berlin - dubbed “sexy, but poor” by its Governing Mayor Klaus Wowereit - received a welcome cash injection to its economy from the thousands of Berlinale guests over the 11 days.

According to Berlin’s Senator for Economics, Cornelia Yzer, the Berlinale was expected to generate an additional €125m ($171m) for the capital’s economy.

Speaking on the eve of this year’s Berlinale, Yzer said: “Not only will the admission figures increase further, but the companies in Berlin also profit from the film festival.”

As in previous years, the 2014 edition of the Berlinale was a forum for discussing European and international film policies and market trends.

Making his first visit to the Berlinale in his new role, MPAA CEO Christopher Dodd addressed the protection of copyright and intellectual property and the globalisation of the film and television markets in a keynote given at a conference of the German Producers Alliance

Apologising for sounding at times “like an evangelist”, he explained: “”he film and television industry stands at a crossroads today, a very challenging one.

“We can either stand by and watch silently as those who do not necessarily share our vision shape this remarkable industry’s future, or we can stand together and shape it ourselves.”

Dodd expressed concerns about the European Union’s “significant” reform plans in the field of copyright.

He said: “I worry that behind some of these efforts is the one to weaken copyright and intellectual property protections, which do not seem to care whether the producers, directors or the hundreds of cast and crew members will be compensated or recognised for their efforts.

“These anti-copyright voices say that we are an antiquated industry, out of touch with the modern, digital world; that we are trying to stifle innovation and creativity that technology gives inspiring young voices.”

“No, we are not an antiquated business at all. Far from it.”

Producers and film funders from Brazil and Germany met during the first weekend of the festival to discuss the opportunities for greater collaboration between the two countries’ film industries.

This meeting came as the first official German-Brazilian co-production Praia do Futuro by Karim Ainouz was screened in the Berlinale’s Official Competition.

In a roundtable, ANCINE’s Eduardo Valente suggested that a co-development fund on the lines of the one already existing between Brazil and Italy was something to consider for the future.

Elsewhere, there were meetings of the European Film Agency Directors (EFADs) and a gathering of public funders in Best Practice Exchange as well as the first MEDIA Info Day under the auspices of the EU’s new Creative Europe framework programme.

This year’s Berlinale was also used as a launchpad to gather information for a new European Commission study on the current situation and future potential of film education in schools across Europe.

Speaking exclusively to ScreenDaily, one of the study’s organisers, Henning Camre, director of the Copenhagen-based Think Tank on European Film and Film Policy, explained that questionnaires will be sent out to all schools in the 28 EU member states, the European Economic Area member states and Switzerland.

Their purpose is to identify the kind of audiovisual content shown in schools and how it is sourced as well as the context in which films are shown in the curriculum, as Film/Media Studies or as part of another subject.

In addition, the issue of the education of teachers in film and media literacy will be addressed.

“One of the Commission’s main concerns is about the access to films for use in education”, Camre said.

¨This is why we were here in Berlin to meet stakeholders such as sales agents and distributors because there are no pan-European agreements on how to exploit the non-commercial rights to films.

“Our focus is also not just to have access to one’s own national films, but to be able to share the rest of European film culture.”

The study is being managed by the FilmEd Consortium, which includes the Think Tank and Ignasi Guardans’ Brussels-based consultancy Cumediae, with the findings and recommendations being delivered by October of this year.