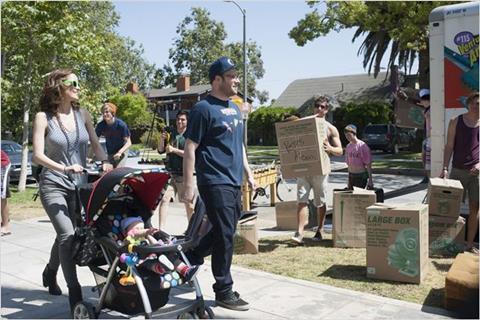 Given that its previews alone would have seen it top last weekend’s chart, it was only a question of how big Bad Neighbours will be on its chart-topping UK debut.

The arrival of Godzilla will likely prevent Bad Neighbours from a second consecutive week at number one, but it could prove potent counter-programming by Universal over the coming weeks.

Despite being prevented from a fourth straight week as the UK’s number one, The Amazing Spider-Man 2 held well to earn an additional $2.2m (£1.3m) from its 488 sites.

Spirited Away is the best-ever UK performer for the legendary Japanese animation studio with $1.5m (£900,000), and The Wind Rises has a strong chance of challenging that if it holds well.

Marking Icon’s return to UK cinemas, Next Goal Wins scored a UK opening of $29,000 (£17,145) from its 32 sites, including previews. Icon Film Distribution’s first release of scale will be Jim Mickle’s Cold in July on June 27.

This week’s only saturation release comes in the form of Warner Bros’ Godzilla (opens May 15), while Sony’s In Secret receives a wide release.

StudioCanal’s The Two Faces of January, Arrow Films’ A Touch of Sin and Picturehouse’s Concussion are among the films receiving a limited release.