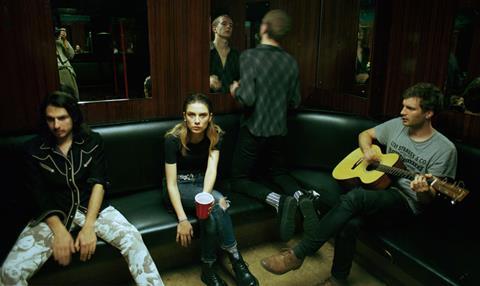 The 2017 Berlin Film Festival has revealed the first raft of titles selected for its Generations sidebar, which features youth and children’s films.

Michael Winterbottom’s music documentary On The Road [pictured], which follows the band Wolf Alice on tour, will open the Generation 14plus programme this year.

Also playing in that strand will be Dash Shaw’s My Entire High School Sinking Into The Sea, which features the voices of Jason Schwartzman, Maya Rudolph, Lena Dunham and Susan Sarandon.

Further UK features playing in 14plus include the world premieres of Carol Salter’s Almost Heaven and Rafael Kapelinski’s Butterfly Kiss.

Almost Heaven
United Kingdom
dir. Carol Salter
World premiere
Far from home, 17-year-old Ying Ling practices for her examination to become a mortician at one of China’s largest funeral homes. In addition to frequent qualms and farewell ceremonies, the everyday routine of this unusual occupation also serves up both humorous and life affirming moments. Carol Salter’s debut outing is an empathetic documentary portrait touching on fears, friendship and coming of age amidst ghosts and the dearly departed.

Ceux qui font les révolutions à moitié n’ont fait que se creuser un tombeau (Those Who Make Revolution Halfway Only Dig Their Own Graves)
Canada
dirs. Mathieu Denis, Simon Lavoie
European premiere
With epic scope and stunning polymorphism, the film follows a group of young people in Québec who resolve to form a revolutionary cell together in the aftermath of student protests. This unflinching work from Mathieu Denis (Corbo, Generation 2015) and Simon Lavoie employs its protagonists to play through what it might mean to instigate a revolution and devote one’s life to a cause in today’s world.

Emo the Musical
Australia
dir. Neil Triffett
International premiere
The forbidden high school love between Ethan, the shy Emo kid with suicidal tendencies, and chipper Christian activist Trinity previously delighted Generation audiences as a short film in 2014. Director Neil Triffett is back with his heartbreakingly funny musical grotesque, now in feature-film length, and chock full of even more colourful characters to light up the big screen.

Mulher do pai (A Woman and the Father)
Brazil / Uruguay
dir. Cristiane Oliveira
International premiere
After the death of her grandmother, 16-year-old Nalu is left to care for her father alone. Any hope of leaving her dismal village now seems to have receded far off into the distance. Cristiane Oliveira’s coming-of-age drama, a work of slowly paced cinema characterised by respectful intimacy and subtle physicality, paints the complex portrait of a relationship between an adolescent daughter and her blind father.

My Entire High School Sinking Into The Sea
USA
dir. Dash Shaw
European premiere
He’s not exactly popular, he’s got friend problems, he wants to make it big with the school paper and he goes by the name of his inventor, Dash. In the school basement, he discovers a secret that rocks the very foundations of his world. Graphic novelist Shaw hopes that his film will reach 15-year-old nerds who are just as crazy about drawings and paintings as he himself was at their age. This work of animation virtually spilling over with ingenuity (and featuring the voice-over talents of Jason Schwartzman, Maya Rudolph, Lena Dunham and Susan Sarandon) is sure to delight young viewers outside of this particular demographic as well.

Krolewicz Olch (The Erlprince)
Poland
dir. Kuba Czekaj
European premiere
The action in The Erlprince builds and surges as dramatically as the ballad by Goethe from which it borrows its title. The boundaries between reality, desire and appearance are blurred in this futuristically tinged film about an extraordinarily gifted young man and his ambitious and wondrous mother. Expressed in a form as unconventional as the characters it portrays, the film oscillates between the poles of both science and nature and love and violence.

Weirdos
Canada
dir. Bruce McDonald
European premiere
Just after the end of the Vietnam War and in the midst of the American bicentennial celebrations of 1976, runaway Kit and his girlfriend Alice hitchhike their way along the east coast of Canada. Bruce McDonald (The Tracey Fragments, Panorama 2007) has managed to create a coming-of-age film that shines equally as a road movie, one driven by a fantastic soundtrack composed of deep cuts from the era in question. A rebellious trip in black and white, in which all sense of certainty gets left by the wayside.

As duas Irenes (Two Irenes)
Brazil
dir. Fabio Meira
World premiere
In the shimmering heat of Brazil, 13-year-old Irene discovers a dark secret her father’s been hiding: he has another family and even another daughter with the same name. Irene embarks on a risky game that could blow up in her face at any moment. The languid summer atmosphere of Fabio Meira’s feature film debut can’t hide the fact that something is simmering right under the surface.

Die Häschenschule - Jagd nach dem Goldenen Ei (Rabbit School - Guardians of the Golden Egg)
Germany
dir. Ute von Münchow-Pohl
World premiere
Scrappy city rabbit Max finds shelter in a hidden Easter bunny school after a misadventure with a model plane leaves him stranded far beyond the city limits. Here he encounters the keepers of the legendary Golden Egg, itself the coveted prize of scheming foxes. After an initial bout with boredom, the secret techniques of the Easter bunnies finally arouse Max’s curiosity. This lovingly drawn German animation film, based on the 1924 classic, is a pure delight buoyed by imagination and brisk pacing and graced with the voices of Senta Berger, Friedrich von Thun, Jule Böwe and Noah Levi.

Primero Enero (January)
Argentina
dir. Darío Mascambroni~
European premiere
Primero enero is the directorial debut of Argentinian filmmaker Darío Mascambroni. 11-year-old Valentino’s life goes off the rails when his parents get divorced, challenging him to see the world from a different angle. In a tender and moving father-son story, the director takes his protagonists and his viewers out to the countryside, into a world of heightened sensitivity.

Red Dog: True Blue
Australia
dir. Kriv Stenders
European premiere
Australian director Stenders delighted Generation audiences in 2011 with a legendary story about a very special dog. Now, at the centre of this sequel - which is also a prequel-  the red canine is joined by 11-year-old Mick, who treasures his bond with his four-legged friend above all else. Destiny has brought the duo together on a farm in the Australian outback, where the two partake in mystical adventures and Mick encounters his first true love. With great humour and sensitivity, the film is a tale of growing up in a time of transformation.

Richard The Stork
Germany / Belgium / Luxemburg / Norway
dir. Toby Genkel, Reza Memari
World premiere
Even though everybody else thinks he’s a sparrow – Richard himself holds tight to the conviction that he is in fact a stork. In this fast-paced adventure, Toby Genkel and Reza Memari tell the story of a bird who sets off self-confidently on a winter trip to Africa in a literal rite of passage that simultaneously serves as an empathetic tale about otherness and self-discovery. This German-international co-production provides spellbinding entertainment with its fantastic and fanciful fable showcasing top-shelf animation.

Tesoros
Mexico
dir. María Novaro
World premiere
Siblings Dylan and Andrea set off with their new friends on a marvellous journey of discovery in search of long lost pirate loot. In refreshingly sunny images, María Novaro gets up close to her characters to tell a story of children confidently indulging their lust for life and curiosity. In a commune on Mexico’s Pacific coast, they are given space to go their own ways and together find something much more valuable than buried treasure.

Shi Tou (Stonehead)
People’s Republic of China
dir. Xiang Zhao
World premiere
10-year-old Shi Tou, the son of a migrant labourer, grows up alone with his grandmother. It’s so hard to tell right from wrong! Sharing a reward with a classmate or waiting until his father returns, obeying his teacher of protecting his friend – which one should he choose? With documental authenticity, Xiang Zhao paints a portrait of life in rural China and a society in which an entire generation has too often been left to grow up in the absence of their parents.