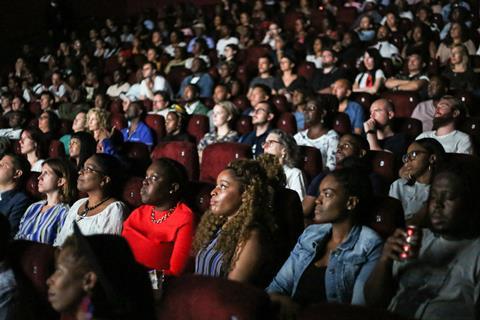 A screening by FAN partner We Are Parable

The site is aimed at exhibitors, to help them ‘create welcoming spaces with skilled staff that are more approachable for diverse film communities’, according the FAN. It offers over 300 resources including how-to guides and first-hand testimonies.

It also hosts collaborations with specialist organisations including the UK Cinema Association and The New Black Film Collective, as well as over 150 contacts for further information on specialist services.

The site has been created in response to a 2017 survey of the FAN membership which showed many members felt there are barriers restricting their enjoyment of the cinema experience, including limited knowledge of partners, programming, funds, staff confidence and lack of resources.

The project is led by Film Hub Wales as part of a UK-wide strategy to improve diversity and inclusion.

Toki Allison, FAN access officer, explained the project “asks exhibitors to get into a dialogue with audiences through networking and training. Programmers are working closely with grassroots communities”.

In April 2018 the BFI apologised for its handling of an incident at its Southbank venue in London, when, according to multiple reports on Twitter, a cinemagoer with Asperger Syndrome was “forcibly removed” from a screening of The Good, The Bad And The Ugly.