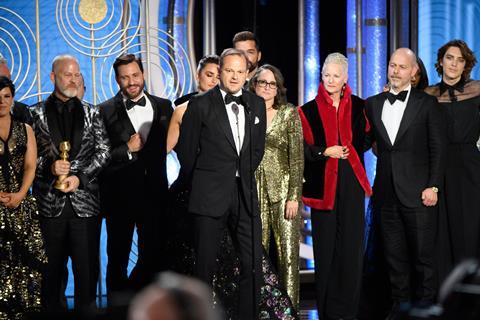 ‘The Assassination of Gianni Versace: American Crime Story’ cast and crew at the Golden Globes

The television categories of the Golden Globes delivered some predictable winners, a few surprises and several awards for British TV actors and series.

Cable networks narrowly beat streaming platforms in the contest for honours, with FX and Netflix tying at three Globes apiece while HBO and Showtime had to make do with one each.

Richard Madden, from the BBC’s Bodyguard (screened in the US by Netflix) pipped The Americans’ Matthew Rhys and others to win best actor in a drama series. And Ben Whishaw, from the BBC’s A Very English Scandal (seen in the US on Amazon), was preferred over favourite Henry Winkler, from Barry, as best supporting actor in a limited series.

Patricia Arquette, from Escape At Dannemora, was the surprise winner as best actress in a limited series, a category in which Amy Adams, from Sharp Objects, had been widely tipped.

Less surprising were the wins for The Marvelous Mrs. Maisel Emmy winner Rachel Brosnahan as best actress in a comedy series and Darren Criss, who took the Emmy for The Assassination Of Gianni Versace, as best actor in a limited series.

Among individual shows, Gianni Versace and The Kominsky Method were the only multiple winners, with two Globes each. Homecoming and Barry, which had gone in with three nominations each, both came out of the ceremony empty-handed, and Sharp Objects, also contending in three categories, produced only one win, for Patricia Clarkson as best supporting actress in a limited series.