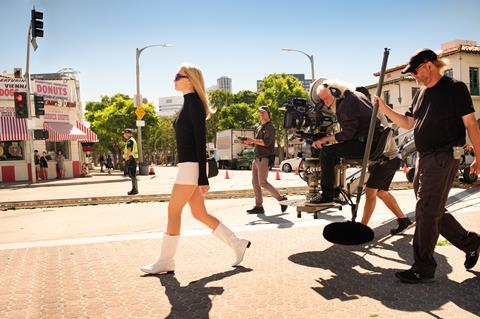 Robert Richardson filming ‘Once Upon A Time In Hollywood’

The California Film Commission (CFC) has named 23 feature projects conditionally approved for credits in the latest round of allocations under the state’s film and TV tax credit programme.

Big-budget projects selected out of the 56 applications the CFC received this round include Zack Snyder’s Netflix project Rebel Moon: Part 1, set to get an estimated credit of $18.5m on a qualified spend of $83m; Universal’s untitled Jean-Marc Vallee project, with an estimated credit of $17.3m on qualified spending of $86.7m; and Beverly Hills Cop 4, also for Netflix, with a $15.8m credit on spending of nearly $78m.

Among the 13 independent features included in the allocation are Verona Spies, from The Wedding Singer director Frank Coraci, with an estimated credit of $1m, and Dead Wrong, from Flatliners producer Rick Bieber, with $262,000.

The CFC said a total of $138.7m in credits has been reserved for the 23 projects, on $678m in qualified spending, which in the California programme is defined as below-the-line wages to California workers and payments to in-state vendors. The projects will employ an estimated 4,088 crew members and do a combined 953 days of filming in California.

California Film Commission executive director Colleen Bell commented: “We look forward to welcoming this diverse blend of films and filmmakers to the tax credit programme. The 23 projects announced today will bring thousands of jobs and significant economic opportunity to regions across the state.”

Since it was launched in 2014 with annual funding of $330m, California’s tax credit programme has previously helped fund features including Space Jam: A New Legacy, Palm Springs and Once Upon A Time…In Hollywood.

Under recently signed legislation, the programme is due to get additional $180m in funding over the next two fiscal years. Of the extra $90m a year, $15m will be used to encourage TV series to relocate to California and $75m will go to TV series already shooting in the state.

Another $150m will be made available to film projects shot at ‘certified studio construction projects’ involving the construction of one or more sound stages.

The programme’s next application periods are September 20-27, for recurring and relocating TV series runs, and January 24-31 next year for features.