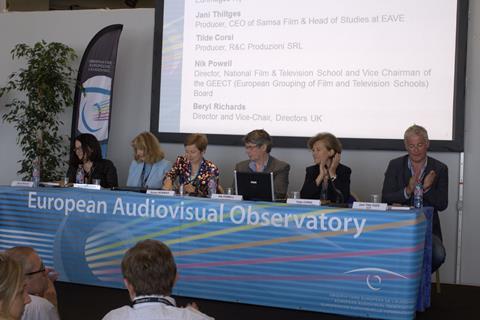 Gender-based film quotas are the only way to boost the position of women in the film industry, said panellists at a European Audiovisual Observatory workshop in Cannes on Saturday.

The packed out workshop, entitled Girls Just Wanna Have Film! presented three studies looking at the position of women in the film industry.

The timely conference followed comments by Cannes Film Festival jury president Jane Campion [pictured] that there was ‘inherent sexism in the industry”.

New findings by the EAO, showed that female directors accounted for 16.1% of the 9,349 European films released in Europe from 2003 to 2012, which in turn accounted for 8.7% of the box office in that period.

A British Film Institute (BFI) study on female directors and screenwriters in the UK from 2010-2012 revealed that woman wrote 37% of the top independent films in that period and directed 18%.

The CNC also presented a study previously released in France, which showed that 25% of first time and 33% of second-time films were directed by women.

“Unless we take affirmative action nothing will happen,” said Sanja Ravlic.

“I’ve never been an advocate of quotas but after hearing these figures, I am beginning to think they make sense,” said Italian producer Tilde Corsi of R&C Productions.

“I’m not for quotas per se but I think we need to set up ring-fenced funds aimed at minorities, whether its ethnic minorities or women, who are not a minority group but are under represented,” commented Nik Powell, director of Britain’s National Film and Television School.