Creative Europe chief to step down

EXCLUSIVE: Xavier Troussard to leave after 12 months in role. 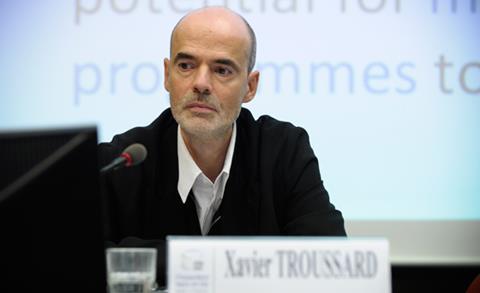 Xavier Troussard, head of unit at the European Commission’s (EC) Creative Europe programme, is to leave this post at the end of next week.

As of July 1, the French exec will take up a new position at the EC’s Joint Research Centre (JRC) - the Commission’s in-house science service - with a focus on foresight and behavioural insights.

Troussard succeeded Aviva Silver as the MEDIA Programme’s Head of Unit in July 2013 after nearly 25 years of being closely involved in the formulation of European audiovisual policy within the EC.

He began his career in 1989 as an administrator at the EC’s Audiovisual Policy Unit and became head of unit there in 2002. Five years later, he was appointed head of the Cultural Policy and Intercultural Dialogue Unit at the DG Education and Culture and subsequently acting director at the same DG in the Directorate for Culture, Multilingualism, and Communication.

The Creative Europe framework programme for the creative and cultural sectors, which merged the former Culture, MEDIA and MEDIA Mundus programmes, came into effect at the beginning of this year with a global budget of €1.46bn ($2bn) for 2014-2020.