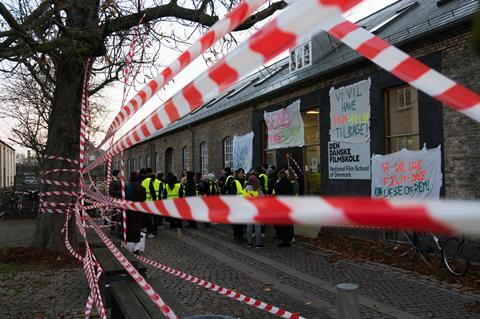 Students have blockaded the main entrance to the school

Directors Lone Scherfig, Dagur Kari and Nikolaj Arcel, and producer Vibeke Wineløv are among the members of the Danish film industry to have signed a petition in support of an ongoing strike by students at the National Film School of Denmark.

They are calling for the removal of director Vinca Wiedemann due to curriculum changes she introduced in autumn 2019.

Now in its sixth day, the students are protesting Wiedemann’s reduction in the number of students the Copenhagen-based school accepts each year and the change in the qualification from a vocational diploma to a bachelor’s degree.

The 96 students on strike - the entire student body - believe the revised curriculum will include too little practical learning.

The public petition, which stands at 521 signatures, has also been signed by filmmakers including Jørgen Leth, Piv Bernth, Mikala Krogh, and Michael Noer. It stated: “The Danish Film School must be an art school. And in an art school, the students and their development are the most important thing - not schematic teaching plans.

“With Vice-Chancellor Vinca Wiedemann and Head of Studies Søren Friis Møller at the helm there is really goodbye to the practice-based Master Teaching tradition with film productions as the cornerstone of the program. It is now a school with 85% common education and 15% specialized vocational education.”

The students began blocking entrances to the school on Friday, November 15, wearing yellow vests and setting up barriers to prevent access.

The protests were triggered in response to the dismissal of Arne Bro, long-time head of the school’s documentary programme, on November 14. Bro had been head of documentary training at the school since 1992 and is considered a popular member of the Danish film community. No announcement has yet been made regarding a successor.

Following an email from Wiedemann to staff and students informing them of Bro’s departure, students organised a meeting on Friday, which led to the protests.

In a press release issued on Friday, the students said:

We are picketing the Danish National Film School in protest against its principal Vinca Wiedemann, and demanding her dismissal.  While recognising that the expulsion of our teacher Arne Bro is a human resources issue and that the procedure surrounding it should be respected, we believe it highlights Principal Vinca Wiedemann’s leadership style, and the more academic direction in which she is taking the school. Arne Bro exemplifies the artistic integrity which is the soul of the National Film School. Those of us who have begun the new-style curriculum can confirm the fears voiced at the time of Vinca Wiedemann’s appointment that her plans for the school would mean more time spent on academic study and less practical hands-on and subject-specific work. This destroys the film school as we know it. Given our declaration of mistrust of January 2019 and the current situation, we now feel compelled to take drastic measures to save the school we love. We are not opposed to re-imagining the Film School, but we will not help ruin it. This is why 84 percent of us have agreed to demand Principal Vinca Wiedemann’s departure.

Speaking to Screen, a representative for the group said, “We require principal Vinca Videmann to step down as principal, to be replaced by a board. This will ensure that in future, no principal can make radical decisions on the future of the film school without the consultation.

The movement has a significant social media presence, including a Facebook group called ‘The Information Group for the Film School’s future’ and a logo for Facebook users to add to their profile pictures to show support to the cause. 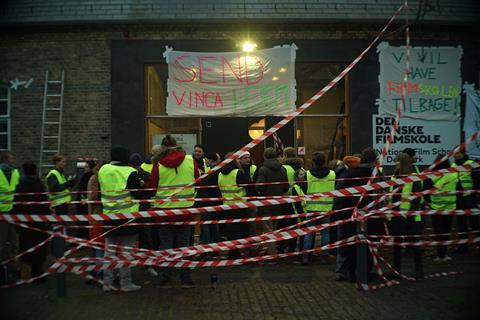 Wiedemann has been director of the school since 2014, having previously been an editing student there, graduating in 1987. She has worked as a producer, with credits include Pernille Fischer Christensen’s A Family; and as a story consultant on titles including Thomas Vinterberg’s The Hunt and Lars von Trier’s Nymphomaniac Vol. I. Students issued a statement expressing their concerns over her in January of this year.

Neither the school nor Wiedemann have responded to Screen’s request for comment.

Icelandic director Dagur Kari, who was head of the directors programme at the school from 2013 to 2017, has credits including 2015’s Virgin Mountain, is a signatory to the letter and one of those to express his support for the students.

“The current administration is in the process of breaking down the core values of the school and devaluating a beautiful tradition,” Kari told Screen.

He suggested Wiedemann is trying to improve the school’s standing “to a league of universities that educate students on what the system has defined as ‘highest level’“, but that doing so ”has no meaning for the film industry, where your sole commodity is your talent and ability to collaborate.”

Offering words of support for the striking students, he said their actions are part of “a fight against the academization of art education” and they should “stay strong, persist and endure!”