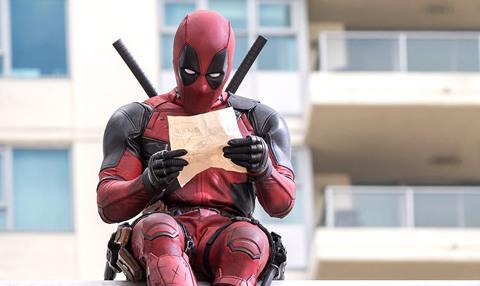 It might have been Oscar weekend, but UK audiences were still all about Deadpool as it recorded a hat-trick at the top of the chart.

Grimsby’s debut marks the lowest for a Sacha Baron Cohen creation, some way behind his previous outing The Dictator which marched to a $6.9m (£4.96m) bow from its 509 sites, including $2.1m (£1.54m) in previews.

Even Ali G Indahouse opened with $4.5m (£3.23m) back in 2002, although it’s worth noting that the character was already well-known by UK audiences.

Last week’s highest new entry How To Be Single held well in its second weekend as it dropped one place to fourth.

It now faces a challenge to match even The Road’s $3.7m (£2.66m) result as John Hillcoat’s second-best performance in the UK.

Fox’s The Other Side Of The Door and Warner Bros’ Truth both receive wide releases, while Dogwoof’s Hitchcock/Truffaut and Vertigo Releasing’s Goodnight Mommy are among the films receiving a limited release.