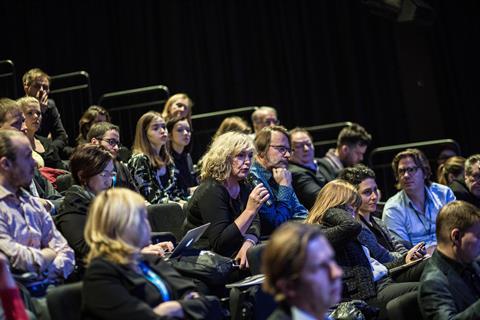 It was the last European Film Forum of 2015 within a major festival and also the largest in terms of speakers – 28 including European Commission VP Andrus Ansip, the European Investment Fund’s Nitan Pathak and producer and venture investor David Traub (Jobs). EFFT hosted more than 250 participants.

Industry@Tallinn director Sten-Kristian Saluveer said: “As a festival we are basically a middleman between all of the parties – we need to work with the filmmakers in order to screen the films, work with the audiences to understand their needs, and work with the policymakers while at the same time being influenced by technological changes.

“So Tallinn Black Nights Film Festival, with the city’s cultural and tech-savvy DNA, was the right place for all these people to come together.

“It was a challenge because all these people have different goals and interests. But despite that, we all want to create and show meaningful content to appreciative audiences. And with that common goal, I think we were able to stake common ground and start to find ways to work together.”

Ansip addressed one of the film industry’s primary concerns over DSM when he declared: “The European Commission does not want to break the concept of territoriality. I don’t want to impose pan-European licenses, the principle of territoriality should stay.”

“But we need to foster legal access,” he added, speaking to the fact that EU citizens can cross borders freely to work and live, but are unable to maintain access to geo-blocked content they have paid for or would like to pay for and view legally,

“If we bring consolidation in the marketplace, we give European film a real shot in the world,” said producer David Puttnam in a video speech.

Panelists expressed concerns about growing platforms such as Netflix, Amazon and Google taking over the market, and the need for transparency in accounting.

“Our fear is that the European market becomes centred around a limited number of competitors,” said Benoit Ginistry, director of the International Federation of European Film Producers Associations (FIAPF).

Panelists and audiences members alike repeatedly referred to Netflix’s practice of not disclosing figures. “We want the numbers. Currently, we get nothing for VOD,” said Charlie Bloye, Chief Executive of Film Export UK.

With a concern for such giants flattening the local characteristics out of films, panelists said it would be necessary to find ways to get these often non-European-based companies to give back to local cinema with focused promotion and financing with the profits they make in Europe.

“DSM is a wide concept. We also need to work on local markets - start from making sure that locally, European content is available,” said Christine Eloy, MD of Europa Distribution.

Lauri Kivinen, CEO of YLE Finland, were more optimistic. “Obstacles with DSM can be resolved by technological advances and smart regulation,” he said.

Jeff Barry of ICM Partners talked about the importance of powerful storytelling: “It’s all about premium content. You’ve got to aim high.”

Looking to expand their investment portfolios, the VCs came forward asking for filmmakers to approach and educate them about the creative industry.

“Let’s create a Eurovision for European cinema” said Information Technology Scientist and former UN advisor Linnar Viik, implying it would be European audiences who would choose the films that would travel.

National film policymakers emphasized the importance of preserving local cultures and developing cinema literacy in the young in order to increase the European film viewing audience.

Wrapping up the second day of talks and Digitech Corner presentations with some audio visual vision for the future, David Traub emphasized the growing importance of the Virtual Reality (VR) business, but went on to say, “The next big thing is Augmented Reality. VR is self-contained environment, but AR is augmented reality - augmented humanness.”