Lav Diaz’s From What Is Before wins top Locarno prize

Locarno’s Golden Leopard has been awarded to Filipino director Lav Diaz’s five-and-a-half-hour epic From What Is Before. 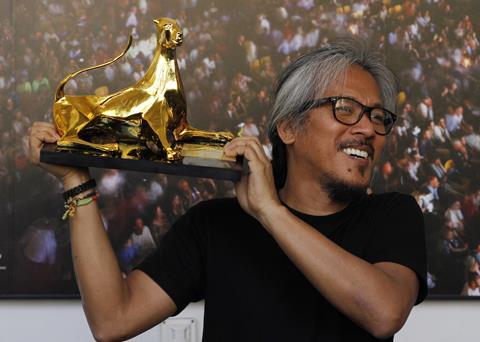 The film, which has the Filipino title Mula sa kung ano ang noon, also picked up the FIPRESCI International Critics Prize, the Environment is Quality of Life Prize, and the International Federation of Film Societies’ (IFFS) Don Quixote Prize.

On learning that he had won Locarno’s top honour, Diaz said that he wanted to dedicate the award to his father.

“He brought me cinema, he’s a cinema addict, and he started this passion in me,” said Diaz.

“For the Filipino people, it’s for them, for their struggle, and then I would like to dedicate it to all serious filmmakers in the world, to Pedro Costa, he’s my brother and I love his work, to Matias Pineiro, and to the makers of all the other films in the competition.“

Shot in black and white, the film revolves around the lives of poor villagers in one of the remotest regions of
the Philippines before Martial Law was declared in 1972 by dictator Ferdinand Marcos.

The International Jury under the president Gianfranco Rosi awarded its Special Jury Prize to Alex Ross Perry for US feature Listen Up Philip and the Leopard for Best Direction to Portugal’s Pedro Costa for Horse Money.

The two acting highlights at this year’s festival were justly recognised by the jury with the Best Actress Leopard to Ariane Labed for her performance as a second mechanic on an old freighter in Lucie Borleteau’s first feature Fidelio, l’Odyssée d’Alice, and the Best Actor Leopard to Russian actor Artem Bystrov as the simple and honest plumber Dima in Yuri Bykov’s The Fool (Durak).

The Fool, which was picked up for international sales by m-appeal during the festival, was also presented with the prizes by the Ecumenical Jury and the Junior Jury’s First Prize as well as a Special Mention from the IFFS jury of film societies.

The International Jury also gave a Special Mention to Gabriel Mascaro’s first fiction film August Winds, which also tied in nicely with the fact that the Industry Days’ Carte Blanche was dedicated to Brazil this year.

But other well received films such as the Greek film A Blast or past Golden Leopard winner Andrea Staka’s Cure – The Life Of Another did not get any consideration by Rosi and his fellow jury members.

The Filmmakers of the Present competition jury headed by the Syrian director Ossama Mohammed awarded its Golden Leopard to Mexican Ricardo Silva’s first feature Navajazo and the Ciné+ Special Jury Prize to Los Hongos by Colombia’s Oscar Ruiz Navia, which is being handled internationally by FiGa Films.

The prize for the best new director went to the Sicilian-born Simone Rapisarda Casanova for his Canadian-Italian co-production The Creation Of Meaning, with a Special Mention for Damien Manivel’s first feature A Young Poet.

The Leopard for the Best First Feature went to Soon-mi Yoo’s Filmmakers of the Present entry Songs From The North which interweaves footage from the director’s three visits to North Korea with songs, popular cinema and archival footage to create what the jury describes as „a formally innovative representation of the human condition.”

The jury made a special mention of Sawada Masa’s feature debut I, Kamikaze, which had its world premiere in the Out of Competition and is being handled internationally by MK2.

The only new British film in Locarno’s 2014 programme – Pia Borg and Edward Lawrenson’s Abandoned Goods – was named the winner of the Golden Pardino for the Best International Short Film in the Leopards of Tomorrow Competition.

The Silver Pardino and Locarno’s short film nomination for the European Film Awards (to be held in Riga this December) both went to Morgan Knibbe’s Shipwreck.

Tonight’s awards ceremony on the Piazza Grande will be followed by Tony Gatlif’s Geronimo.

Around 20 years in the discussion and planning, Locarno’s „Palacinema“ could come a major step nearer to its realisation this autumn.

If the Ticino region’s Grand Council gives the greenlight to the $ 37.2m (CHF 33.6m) project in September, conversion work will begin on the former school building near the festival’s La Rotonda meeting place for the centre to be partially opened in summer 2016 during Locarno’s 69th edition.

Apart from housing three screens with overall seating for 800, the film and audiovisual competence centre would provide a permanent HQ for the festival organisation and its archive as well as the new Southern Switzerland Film Commission and training initiatives.

However, the venture has attracted its fair share of controversy: an online campaign – www.falsopalacinema.com – is arguing that other projects in the town and region should have a higher priority, while the Russian state film archive Gosfilmofond earlier this year offered to invest $ 1.1m (CHF 1m) in the centre, allegedly in return for the festival offering space in its programme for some Russian films. Festival president Marco Solari’s reaction, according to the Tessiner Zeitung, was: „Nobody interferes in the festival programme!“

While artistic director Carlo Chatrian supports the plans for the Palacinema, he told Screen Daily that the financing of improvements to the Fevi hall – the venue for the Competition films – has a much greater priority for him in order to bring the facility up to an acceptable standard for an international film festival.

The canton of Ticino has provided $ 3.3m (CHF 3m) from the Swisslos Fund for the urgent renovation works.

Christian Zübert’s Tour de Force (Hin und weg), which had its world premiere on Locarno’s Piazza Grande on the first weekend (Aug 9), will be first shown in Germany as part of the 22nd Filmfest Hamburg (September 25 – October 4,2014).

The road movie will then be released by Majestic Filmverleih in German cinemas on October 23.

Hamburg has also confirmed that it will be presenting Ukrainian director Myroslav Slaboshpytskiy’s Cannes success The Tribe (Plemya) which was shown in Locarno since he was a member of the jury for the Leopards of Tomorrow competition.

Film director Andreas Dresen is curating a special sidebar DDR Deluxe of ten titles from the former GDR, ranging from Gerhard Klein’s 1961 film Der Fall Gleiwitz to Helke Misselwitz’s documentary Winter Adé made in 1988, a year before the fall of the Berlin Wall.