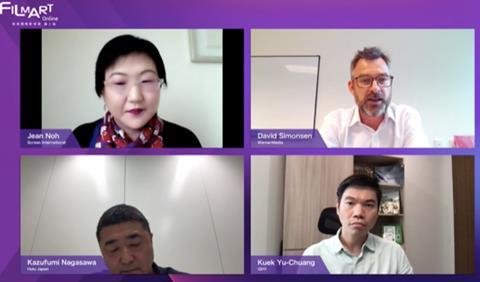 Three leading OTT players active in Asia – WarnerMedia, Hulu Japan and iQiyi International – discussed their strategies for standing out in what has fast become an intensely crowded market in a Filmart session, ‘Betting on the future of Asia OTT’, on the second day of the virtual event (March 16).

The three streamers agreed that, while pandemic lockdowns have expanded the customer base for SVOD services across Asia, the landscape has evolved quickly and it has become more essential than ever to differentiate from competitors. In nearly every major territory, global streamers are coming up against a host of strong local players, as well as regional platforms like Chinese streamer iQiyi, which are taking their first steps outside their home markets.

All three speakers explained how Asian content – in different combinations of language, genre and volume – is enabling them to expand their customer base and retain subscribers. Kuek Yu-Chuang, iQiyi’s Singapore-based vice president of international operations, said the company has been targeting Southeast Asia with Chinese and Korean dramas and reality shows, as well as forming partnerships with major content producers in the region, such as Malaysia’s Media Prima.

“We’re already seeing demand signals picking up around the world,” said Kuek, adding that the service’s user interface is available in 11 different languages. “The play going forward is to be mass market in Southeast Asia and target the Chinese and Asian diaspora in those markets where the audience might be less familiar with the product.”

Hulu Japan’s managing director & chief content officer, Kazufumi Nagasawa, said Japan may have been slightly slower to the streaming party than some other Asian territories, but has now also become a crowded market with around 20 platforms jostling for share. These include Netflix, Amazon Prime, local telcos and the streaming services of Japan’s traditional broadcasters.

Launched by the US-based Hulu in 2011, Hulu Japan was wholly acquired by one of Japan’s largest traditional broadcasters, Nippon TV, in 2014 and now counts more than 2 million paying subscribers.

Nagasawa said most of these platforms are producing Japanese-language originals, although investment by the global streamers has “not been as huge as in some other territories”. The local focus has worked to Hulu Japan’s advantage over the past year: “We rely on Japanese domestic content, so we’ve not been as affected by the pandemic as production has mostly continued in Japan.”

David Simonsen, WarnerMedia’s SVP, Business and Digital Distribution, Asia, said the company remains committed to production in Chinese and other Asian languages, despite recent executive reshuffles in the region. Like iQiyi International, the studio’s focus has so far been on the fast-growing markets of Southeast Asia, where its on-demand offering HBO Go is available across eight territories (Indonesia, Singapore, Malaysia, Philippines, Thailand, Vietnam, Hong Kong and Taiwan). Just before Filmart, WarnerMedia announced a new Thai-language mystery series, Forbidden, directed by Anucha Boonyawatana and Josh Kim.

“Last year we were involved in eight original productions, although Covid slowed some of them down,” Simonsen said. “We had three shoots impacted, which was tough for us and for our partners, but we see production ramping up and our ambitions are high.”

Simonsen said the studio was open to developing different formats from movies to long-form series, but authenticity in the markets where the content originates is key: “We believe if content can find an audience in its home territory or community, then it has more chance to travel and find global success. Our shows do get aired in the US, so it’s a great opportunity to showcase stories from Asia.”

WarnerMedia has not announced a time line for the launch of its HBO Max streaming platform in the region, although when asked about the service, Simonsen said “Asia is very much in our plans.”

For now, however, the absence of HBO Max means the region is less affected by WarnerMedia’s controversial windowing strategy, in which movies are released simultaneously in theatres and on the streaming service. “Theatrical is an extremely important part of our business. But as you look at some of these trends and how Covid in certain areas is stretching out longer, people are looking at these windows, and where HBO Max has launched, it is providing an alternative to monetise them in a way the theatrical model didn’t have before,” Simonsen said.

While all the speakers agreed that Korean content has the widest reach across the region, they also noted now competitive the space has become. Netflix, Amazon and iQiyi are all actively producing Korean originals, while Simonsen said HBO would “cross that bridge when we come to it, but clearly it will be an important area in our Asian business structure.”

On the other hand, Kuek said Chinese content is also starting to gain traction outside of its home market. “When we do our social listening, we hear fans mention Korean and Chinese cast names interchangeably, which we take as a positive signal. We’re also seeing Chinese content do a bit better on the awards circuit, and the award that [iQiyi suspense thriller series] The Bad Kids received in Busan last year was a good sign.”

Nagasawa said: “On the series side we are dependent on Japanese content, so we’re very choosy about the international series we acquire. That said, we are one of the most aggressive parties to acquire content from around the globe – over the past few years we’ve acquired from Russia, Spain, Brazil, Turkey, India and Australia. That’s not something that the other [Japanese] companies are really doing.” He added that foreign-language films and series (i.e. non Japanese language) account for around 30% of Hulu Japan’s content offering.

But while the market is crowded, and opportunities for Western content may not be easy to find at this point in its development, the speakers also said it’s not yet a saturated market. “There’s still a long way to go if you look at underlying penetration – there are still opportunities and people will find niches on the AVOD side or the premium subscription side,” said Simonsen. “It will be an exciting place for people making and selling content. Everyone involved should be looking forward with a lot of optimism.”