The Golden Lola for best feature film went to veteran director Edgar Reitz’s Home From Home - Chronicle of a Vision at the German Film Awards. 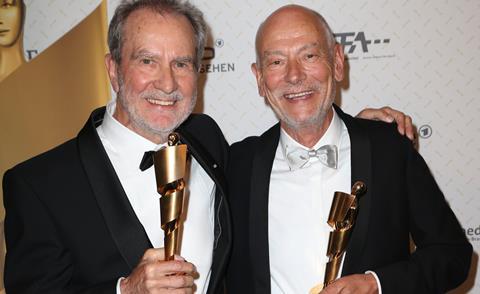 The black-and-white epic, set in a fictitious village in Germany’s Hunsrück region in the mid-19th century, also received awards for Best Director and Best Screenplay (shared with co-author Gert Heidenreich) after being nominated by the members of the German Film Academy in a total of six categories.

The co-production with Margaret Ménégoz’s Les Films du Losange is handled internationally by ARRI Media Worldsales and was released theatrically in Germany by Concorde Filmverleih.

The prizes were handed out at the 64th annual film awards, held in Berlin.

The night belonged to Austrian film-maker Andreas Prochaska and his producers Helmut Grasser of Allegro Film and Stefan Arndt of X Filme Creative Pool with their Alpine western The Dark Valley, which premiered at the Berlinale in February.

After being nominated in nine categories, the film hit the jackpot on eight occasions from the Silver Lola for best feature film and the best supporting actor Lola for Tobias Moretti as well as in every technical category - cinematography, production design, costume design, make-up, and music score.

The only category in which it was nominated but didn’t win was for editing, which went to Hansjörg Weißbrich for Georg Maas’s Two Lives, winner of the Bronze Lola for best feature film.

The impressive haul by X Filme Creative Pool this year comes in the wake of such previous winners as its co-production of Michael Haneke’s The White Ribbon, which won 10 awards in 2010; and Wolfgang Becker’s Good Bye, Lenin!, which picked up nine Lolas in 2003, including two audience awards for best feature film and best actor Daniel Brühl.

This more than made up for X Filme’s disappointment last year, ¨only¨ winning five technical Lolas for Tom Tykwer and the Wachowskis’ Cloud Atlas when Oh Boy nabbed six Lola trophies.

There is a bittersweet irony that the evident enthusiasm of the German Film Academy’s 1,600-strong membership for The Dark Valley has not been translated into commercial success at the German box office. To date, X Filme’s distribution arm X Verleih has taken just over $860,000, while the Austrian release by Filmladen has grossed almost double, at more than $1.5m.

It was no surprise when last year’s top film at the German box office - Bora Dagtekin’s school comedy Suck Me Shakespeer (Fack Ju Göthe) with almost 6 million admissions in 2013 - picked up the Lola for the most successful German film.

Saying the film’s title out loud in public has become one of the guilty pleasures of the past six months in Germany, and veteran actor Bruno Ganz was no exception at the Lolas.

Before handing the trophy to director Dagtekin and lead actor Elyas M’Barek, Ganz found several opportunities to repeat the title in his short eulogy before observing that the film’s title had often come to mind when he was playing Faust in the marathon staging of Goethe’s Faust I and II before only a sprinkling of hardcore fans.

Emotional highlights during the ceremony, which hosted 1,900 guests in Berlin’s Tempodrom, included the Lola for veteran actor Dieter Hallervorden’s performance in Back On Track, the Bernd Eichinger Prize for producers Roman Paul and Gerhard Meixner of Berlin-based Razor Film, and this year’s Honorary Award to a visibly frail Helmut Dietl, the director of such classics as Schtonk!, Rossini and the Kir Royal TV series.

Germany goes international - but not for the Lolas

At the reception after the ceremony, one of the talking points was the complaint from many producers that the nominations procedure for the Lolas did not acknowledge the importance and extent of German involvement in front and behind the camera of such international productions as Ron Howard’s Rush which were partly shot at locations in Germany.

The key role played by German producers in the international film industry is illustrated by the line-up of the upcoming Cannes Film Festival where four of the Competition titles - Olivier Assayas’ Clouds of Sils Maria, David Cronenberg’s Maps to the Stars, Alice Rohrwacher’s Le Meraviglie, and Nuri Bilge Ceylan’s Winter Sleep - have German co-producers.

State Minister for Culture & Media Monika Grütters may have provided almost €3m ($4.1m) in prize-money and nomination premiums - producer Christian Reitz received €500,000 ($690,000) prize-money with the Golden Lola to be invested in a future film project - but the honeymoon period between Bernd Neumann’s successor and the film community is over.

Just hours before the awards ceremony, German Film Academy president Iris Berben had implored parliamentarians at a reception in the presence of Federal Chancellor Angela Merkel and other political bigwigs to halt plans that will reduce the budget of the German Federal Film Fund (DFFF) by €10m ($13.8m) this year.

In 2013, the budget for the ¨German spend¨ incentive had been increased to €70m ($96m) and benefitted such international productions shooting in Germany as The Monuments Men and The Grand Budapest Hotel as well as local productions ranging from Suck Me Shakespeer to The Physician.

But German producers were devastated to learn at the beginning of March that the CDU/CSU-SPD coalition’s budget plans for 2014 envisage the funding for the DFFF returning to the previous level of €60m ($82.5m).

Speaking at last week’s CDU Media Night about the future direction of German national media policy, Grütters had indicated that she would ¨campaign vigorously for the continuation [of the DFFF] at this level [i.e. € 60m]¨ -  not exactly what the local film industry wanted to hear.

Berben tried to get Grütters to commit herself in front of the awards ceremony audience of 1,900 to fight for the €70m budget, but the State Minister wriggled out of meeting the challenge - or simply ignored it - by merely enthusing in a rather general, superficial way about the success of German cinema in 2013 with a market share of  26.8%  and the continuing popularity of local titles in the first quarter of this year.

Fack Ju Göthe passed over the State Minister’s lips on a couple of occasions, but she artfully avoided any mention of the DFFF, something that will not have enamoured her with the German film community.