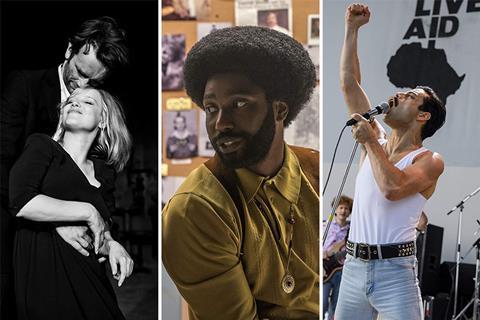 This morning Golden Globe nominations brought a number of surprises, omissions and interesting pointers for the upcoming awards season.

In the Globes’ two best picture categories, A Star Is Born, BlackKkKlansman, The Favourite and Green Book all make expected appearances; Black Panther makes the cut for drama, become the first Marvel franchise film to do so; and late bloomers Mary Poppins Returns and Vice – the film Globes voters showed the most love for with six nominations – each grab spots in the musical or comedy category.

Eyebrows will be raised at Bohemian Rhapsody’s appearance at all, let alone in the drama category, although Globes rules have changed since the days of Walk The Line to prevent studios from entering music-based biopics or narratives like Rhapsody and A Star Is Born as musicals.

But Rami Malek’s performance was seen as Fox’s best chance for a Rhapsody nomination (which it also achieved), and although ROMA wasn’t eligible in the Globes best film categories as a non-English-language feature, the Freddie Mercury crowdpleaser has secured its spot at the expense of acclaimed, female-directed dramas including Can You Ever Forgive Me? and Leave No Trace as well as Damien Chazelle’s First Man, A Quiet Place and The Front Runner starring Globes favourite Hugh Jackman.

HFPA voters also opted for another big crowdpleaser, nominating Crazy Rich Asians in the musical/comedy category, perhaps confirming how discussion and awareness around industry diversity is being felt in awards circles.

That’s also on show in a drama category that contains Black Panther, BlackKkKlansman and If Beale Street Could Talk, presenting good optics for the Globes and its voters (even though Steve McQueen’s Widows failed to make the cut).

In addition to the lack of love from the HPFA for Debra Granik (Leave No Trace), Marielle Heller (Can You Ever Forgive Me?) and Karyn Kusama (Destroyer), the key filmmakers not to receive a best director nomination are Barry Jenkins and Ryan Coogler although both If Beale Street Could Talk and Black Panther have been nominated for best drama,and Yorgos Lanthimos, whose The Favourite is nominated for best comedy or musical.

Capernaum, directed by Lebanon’s Nadine Labaki, is nominated for best foreign-language film but the award is for the producers and the country, and not the director.

Pawel Pawlikowski’s Cold War will be hugely disappointed to miss out on a nomination here as the Polish-set Communist-era love story is one of the most successful foreign-language films of the year at the international box office and was considered a shoo-in for this category.

Pawlikowski’s Ida was nominated for a Globe in 2015 and although it didn’t win, it did go on to snag both the Bafta and the Oscar.

It is no surprise to see Lukas Dhont’s debut feature Girl, Alfonso Cuaron’s family ode ROMA and Hirokazu Kore-eda’s Palme d’Or winner Shoplifters recognised by the HFPA and the inclusion of Nadine Labaki’s Lebanese drama Capernaum (another Cannes premiere) and Florian Henckel von Donnersmarck’s Venice title Never Look Away about a German artist coming to terms with his childhood under the Nazis, gives a truly global feel to the best foreign-language film nominations.

On the distributors side, Annapurna Pictures put in a strong showing with a joint-highest 10 nominations, alongside Fox Searchlight and one ahead of Walt Disney.

Annapurna’s most nominated title is Adam McKay’s Vice with six, the highest of any film, while If Beale Street Could Talk picked up three and Destroyer took one. The positive result comes after a year of disruption at the company, with films dropping off the slate and staff departures hitting the headlines in October.

Paramount, having a strong year in 2018 after a period of difficulty, may be disappointed with just the solitary nod for its mega-hit A Quiet Place. A24 also received just the one nod (for Eighth Grade), with titles such as Hereditary being shut out.

Spread across both drama and comedy/musical categories, the Globe acting nominations typically throws up a surprise of two. Rosamund Pike’s nomination for A Private War (actress, drama) saw her make the list ahead of other tipped performances such as Viola Davis in Widows (Steve McQueen’s film received zero nominations) and Yalitza Aparicio in ROMA.

Boy Erased’s Lucas Hedges made the cut (actor, drama), with names such as Ethan Hawke (First Reformed) and Hugh Jackman (The Front Runner) missing out.

A Star Is Born pair Lady Gaga (actress, drama) and Bradley Cooper (actor, drama) are also both nominated, though Sam Elliot missed out in the supporting category.