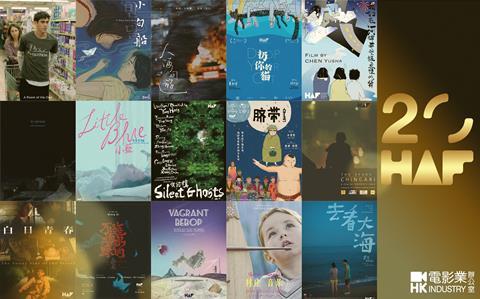 Among the selection, HKIFF industry director Jacob Wong highlighted two projects: Borrowed Time and The Sunny Side Of The Street. “They are the first projects to have progressed through the HAF eco-system, from Film Lab to In-development projects, and now onto WIP,” he said.

Both won script consultation service awards at HAF Film Lab in 2019 before taking part in HAF’s in-development projects section the following year. Both are in post-production.

“We set out to provide coordinated support across various stages of independent filmmaking, covering every aspect from early-stage project development, financing to post-production and promotion. It is very satisfying to witness some of these projects coming through,” he added.

In The Sunny Side Of The Street, Anthony Wong (Still Human) plays a taxi driver who becomes a father figure to a Hong Kong-born Pakistani child refugee. With Winnie Tsang as a producer, this is the feature debut of Hong Kong-based Malaysian filmmaker Lau Kok-rui.

Borrowed Time, which Stanley Kwan produces for first-time Chinese director Cai Jie, is about a daughter who sets out from Guangzhou to look for her long-missing father in Hong Kong, played by Tai Bo (Suk Suk).

Wong Lina (also credited as Wang Lina), whose A First Farewell was the Firebird Award winner of HKIFF’s first-ever Chinese-language Young Cinema competition in 2019, returns with Village‧“Senet”, a poetic musical about a boy from Xinjiang’s Taklamakan Desert, while Qiao Sixue’s debut feature, The Cord Of Life, examines the notion of hometown through a nomadic electronic musician who brings his sick mother back to the Mongolian grassland for her last days.

Chinese-language projects aside, the lineup includes Israel-Italy co-production A Room Of Its Own by Scaffolding director Matan Yair, in which a 17-year-old searches for his path in the world when his mother moves into his room after his father leaves.

A further two projects come from India. Documentarian Rajesh S Jala’s first narrative feature The Spark is about a victim of violence who creates havoc in the ancient city of Banaras, and Syed Maisam Ali Shah’s feature debut In Retreat follows a marginalised character who makes a dreamlike homecoming journey.

An online WIP open pitch for accredited Filmart and HAF guests is scheduled on March 14 during the three-day HAF (March 14-16), which will run online alongside the 26th Hong Kong Filmart.

Since its launch in 2017, the WIP section has become an integral part of HAF. The most recent projects to receive international recognition include Ananta Thitanat’s documentary Scala, which is set to premiere at Berlinale Forum; Gao Linyang’s To Love Again and Lei Lei’s animation Silver Bird And Rainbow Fish, which both played in this year’s Rotterdam Tiger Competition, with the former winning the special jury and Fipresci awards. At Venice last year, Arsalan Amiri’s Zalava won the International Film Critics’ Week grand prize, while Kavich Neang’s White Building took the Orizzonti best actor award.