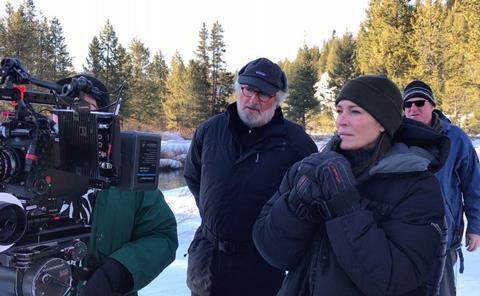 Production is set to begin this summer in British Columbia, Canada, on Robin Wright’s feature directorial debut Land, which HanWay Films will introduce to buyers in Cannes next month.

Land is based on an original screenplay by Jesse Chatham and Golden Globe nominee Liz Hannah (The Post) and will star Wright as a grief-stricken lawyer who goes off the grid.

Taking advice from online survivalists, she inhabits a cabin in the remote Shoshone National Forest in Wyoming, where she must learn to hunt, fish and grow her food as she faces brutal winters, a challenging landscape and local wildlife that could kill her at any moment.

When she crosses paths with a First Nations local, the woman begins to confront her demons and surprises herself with her own will to survive.

HanWay Films MD Stewart said, “Robin proved herself a tour de force taking in hand House Of Cards as a director as well as its lead actor. She speaks very eloquently and passionately about wanting to tell the story of a woman’s journey through loss and pain, where only by giving herself to nature can she find a path to inner peace and redemption. It is a unique cinematic experience of huge scale, yet speaks to our basic human need for more earthy simplicity in this busy noisy world.”