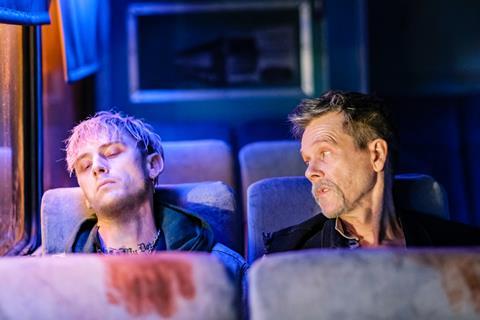 Highland Film Group has signed distribution deals for action-thriller One Way in markets including Germany, Australia and Italy.

The film, which recently wrapped principal photography in the US state of Georgia, is directed by Andrew Baird. Kevin Bacon, Colson Baker, Travis Fimmel and Storm Reid star in the story of a criminal who goes on the run after robbing his former crime boss.

In deals secured at the virtual European Film Market, Splendid Film has taken One Way for Germany and German-speaking Switzerland, Cinemundo for Portugal, Rialto Distribution for Australia and New Zealand, Blue Swan Entertainment for Italy, MCF for ex-Yugoslavia, Just Media for Benelux, Monolith Films for Poland, MGN for Russia and the Baltics, Eagle Films for the Middle East, Moviecloud for Taiwan and FilmFinity for South Africa.

Produced by Thomasville Pictures, the film was developed with funding from Northern Ireland Screen and Screen Ireland.

Highland Film Group’s president of international Todd Olsson said: “We are thrilled with how buyers have embraced Andrew Baird’s second film. The stellar cast lead by Colson Baker, Kevin Bacon and Travis Fimmel has proven to be a powerful ingredient in reaching international audiences. It is a universal story and we cannot wait to see the final film and share it with our international partners and their audiences.”