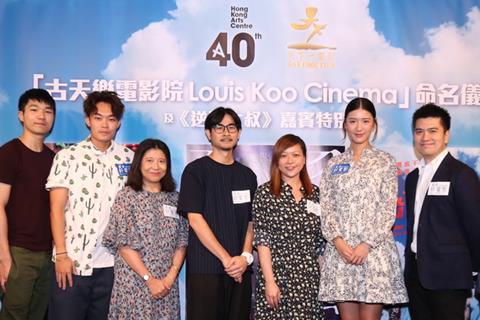 Hong Kong Arts Centre (HKAC) has reopened its main cinema following an extensive refurbishment and partnered with One Cool Film Production on a three-year programme to showcase local films.

Rebranded as the Louis Koo Cinema, the HKAC venue will screen one Hong Kong film a month for three years through the “Great Hong Kong Movies” programme, which will focus on previews of films from emerging Hong Kong filmmakers and classics that have been digitally restored.

The initiative kicks off on August 8 with the restored version of Johnnie To’s 2004 martial arts drama Throw Down, which closed this year’s Udine Far East Film Festival, and will also screen One Cool Film’s Tracey, a transsexual-themed drama, directed by Jun Li and starring Philip Keung and Kara Hui.

Produced by Joe Ma and Jacqueline Liu for One Cool Film Production, the film revolves around a group of broadband engineers, threatened with the loss of their jobs, who form a dragon boating team.

HKAC executive director Connie Lam said the venue, which was under refurbishment for a few years, forms part of the organisation’s mission to fill the gaps in Hong Kong’s arts and cultural scene.

“We observe that Hollywood movies are a big draw in Hong Kong, and co-productions between Hong Kong and mainland China are growing fast in the market, while the living space for purely local works is shrinking,” said Lam.

“So we believe there’s a need to build a stable platform for young, up-and-coming Hong Kong directors to showcase their works as well as to attract our audience back to this genre. We envision this platform will also arouse more noise, discussions and even critiques for these local productions, which we believe are essential nutrients for revitalising the Hong Kong film scene.”

Separately from the tie-up with One Cool Film, HKAC is launching two other film programmes – Golden Scene Selection, in collaboration with local distributor Golden Scene, and Independently Yours, working with various partners including indie filmmaking non-profit organisation Ying E Chi.

HKAC also organises ifva (Incubator for Film and Visual Media in Asia), which serves as a platform for emerging talent across short films, animation and interactive media. It holds two events every year – the ifva Awards and ifva Festival, held in March during Hong Kong’s Entertainment Expo.