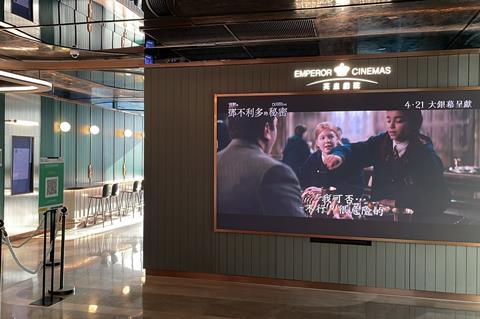 ‘Fantastic Beasts: The Secrets of Dumbledore’ is now on release in Hong Kong

Cinemas in Hong Kong reopened today (April 21) after more than 100 days of closures and are set to give a fresh box office push to a raft of major US studio releases and features from across Asia.

It is more than three months since cinemas were shuttered in Hong Kong in response to the fifth and worst wave of Covid-19 in the city to date. This latest round of closures, the fourth since the beginning of the pandemic, started on January 7 and continued through Chinese New Year, Oscar season and the Easter holiday, with all scheduled releases cancelled during these usually lucrative periods at the box office.

“Quite a number of films have piled up during cinemas closures,” said Timothy Yuen, chairman of the Hong Kong Theatres Association. “Most of them have since been released in other countries or even on streaming media, including Fantastic Beasts, The Batman and Schemes In Antiques.”

Yuen, who is also general manager of Emperor Cinemas Group, which operates seven cinemas in Hong Kong, also told Screen that the number of releases was lower than anticipated.

“The films opening today are not as many as we expected and their movie genres are not rich enough,” he said. “Some film owners are not willing to release new films at the moment, as the government is applying a 50% occupancy rate in cinemas”, which translates into half the potential box office of a full capacity opening.

“It will take at least three months to get cinemas back to ‘normal’, on condition that the occupancy rate will be relaxed and there is no new wave of Covid,” added Yuen.

At the beginning of the year, as cases of the highly transmissible Omicron variant spiked, Hong Kong authorities abruptly announced the tightening of social distancing measures, just two days before public venues such as cinemas and bars were forced to close on January 7. The restrictions were meant to last two weeks but were extended.

Films which were on release had to cut their runs short. Steven Spielberg’s West Side Story screened for one day on January 6, while Chinese crime thriller G Storm was on the way to becoming a hit in Hong Kong, taking more than $700,000 (HK$5.5m) after one week. They will be re-released today along with other previously released titles including Marvel blockbuster Spider-Man: No Way Home, Cantopop icon biopic Anita and Ryusuke Hamaguchi’s Oscar-winning Japanese drama Drive My Car.

After catching up with this backlog of unreleased features, Hong Kong will join the global rollout of Marvel superhero film Doctor Strange In The Multiverse Of Madness on May 4.

However, highly anticipated local films originally scheduled for Chinese New Year will be pushed back further. Feel-good comedy Chilli Laugh Story is now set to open on July 28 during the summer holiday while Sunny Chan comedy Table For Six will receive its world premiere this Sunday (April 24) at the Far East Film Festival in Udine, Italy, before a September release that coincides with the mid-autumn festival holiday in Hong Kong.

Local romantic comedy Far Far Away, which had originally been set for a Valentine’s Day release, is now scheduled for August 4.