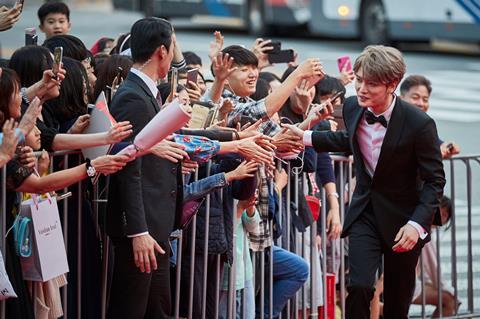 Kim won the award for Studio Dragon’s Mr. Sunshine, a historical drama starring Lee Byung-hun (Red 2) that has premiered globally on Netflix. Hormones: The Series is a teen drama covering controversial topics such as teenage pregnancy, while Faculty revolves around professors and students in a Singapore university.

Best actress awards were presented to Chinese actress Yao Chen for All Is Well and Maja Salvador from the Philippines for Wild Flower. Best actor prizes went to China’s Lei Jia Yin for The Longest Day in Chang’an, Korea’s Kim Nam Gil for The Fiery Priest and Japan’s Yamada Takayuki for The Naked Director.

Taiwan’s The World Between Us, about the aftermath of a mass shooting, took a best writer award for the work of Lu Shih-yuan, as did Korea’s My Mister, about three middle-aged brothers, with the award going to Park Hae Young.

Korea’s Kim Jae Joong, who has starred in TV dramas such as Spy and Manhole, picked up the Excellence Award, while the Lifetime Achievement Award went to Hong Kong TV director and producer Raymond Lee Wai-man (The Flying Tigers).

Organised by the Asian Film Market, the Asia Contents Awards recognise outstanding TV series from across Asia and are part of the market’s plans to expand its activities into the worlds of TV and streaming.