How well do Hollywood remakes fare at the box office?

From Beauty And The Beast to Ghostbusters, Screen looks at the hits and misses. 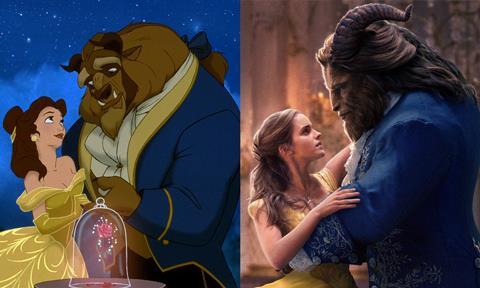 Disney’s live-action remake of Beauty And The Beast is now the highest grossing film of the year so far and has crossed $1bn at the box office, placing it on the cusp of the all-time global top 20.

The film has even surpassed the previous 1991 animated version, itself a huge hit after making $760m in today’s money (adjusting the figure for inflation rates to 2017).

Remakes have become reliable money makers for Disney in recent years (see also Cinderella and The Jungle Book), but the format has been much more hit-and-miss for other studios.

Screen looked at 10 high profile recent remakes to see if they were more successful than their predecessors.

*All box office figures are worldwide grosses sourced from boxofficemojo.com and adjusted for inflation to the year 2017 using usinflationcalculator.com.

Disney, whose stable already includes the Star Wars and Marvel series’, now have another reliable franchise: remakes of their own animated back catalogue. Beast is the biggest success so far in a strategy that started with Cinderella in 2015 and continued with The Jungle Book last year. Together the trio have made more than $2bn at the box office (and counting). Updated versions of The Lion King, Aladdin and Mulan are next.

Disney’s part-live-action part-animated remake of its classic film The Jungle Book soared at the global box office in 2016, grossing almost three times the amount the original animated feature achieved in 1967. A sequel, with Jon Favreau once again directing, is already in the works.

The Ghostbusters remake failed to take off like the original and may have been harmed by an internet backlash against its all-female cast. Before the release, director Paul Feig said: “A movie like this has to at least get to like $500 million worldwide, and that’s probably low.” It got nowhere near.

Despite being widely regarded as a domestic flop, the glossy 2014 Robocop remake performed more positively internationally, grossing the majority of its box office from territories including China, where it took north of $50m. Reviews were middling compared to the classic original however, and director Jose Padilha told Screen: “I didn’t have the creative freedom I needed [on the project]… I spent 90% of the time fighting.”

There have been multiple Godzilla movies made over the years, commencing with the 1954 Japanese kaiju film, but in a straight shoot-out between the two American blockbuster entries, perhaps surprisingly it’s Roland Emmerich’s 1998 feature that just sneaks a neck-and-neck contest.

Despite reportedly costing over four-times more than its 1991 predecessor, the 2015 remake of Point Break couldn’t match the original’s gross. A poor domestic showing was propped up by a strong return in China, where it took $40m. While the film had a substantial budget (estimated at more than $100m), and delivered on high-octane action sequences and stunts, it didn’t have the star power of the original, which boasted Keanu Reeves and Patrick Swayze in the lead roles.

This remake of the Paul Verhoeven classic, with Colin Farrell replacing Arnold Schwarzenegger in the lead role, was a different proposition to the original and failed to catch the imagination of audiences in the same way, taking less than half the 1990 film’s total. Much like Point Break, the film’s relative failure suggests that remakes of 90s genre classics are tricky to get right.

The fan reaction to this update of John Carpenter’s survival horror classic (technically a prequel) was lukewarm, with The Thing failing to get close to the original’s modest box office takings. Box Office Mojo said: “There was a pervasive cynicism about the need for a remake within [the fan] community, though, and with an identical story, location, and title, there didn’t appear to be much of a reason to head to theatres.”

The second remake of an Arnie classic to appear on this list, the Jason Momoa-starring reboot was not a success, taking less than a third of the original’s tally. Momoa was a relative unknown when he took on the role, though Schwarzenegger wasn’t exactly a household name when he did Conan (the film pre-dated Terminator by two years). Generally negative reviews may have harmed the remake, with Screen suggesting the film “inspires little in the way of crossover thrill or appeal”.

The 1959 version of Ben-Hur (the first, silent version was released in 1925) was an enormous success, reportedly grossing more than $1bn in today’s money on its initial release before going on to win 11 Academy Awards, a joint-record that still stands. The remake however (technically adapted from the novel) was a disappointment, grossing less than 10% of the original’s total and failing to trouble the Oscars. Terrible reviews and an outdated theme were cited by commentators, who speculated the film may have lost up to $50m for production outfit MGM.