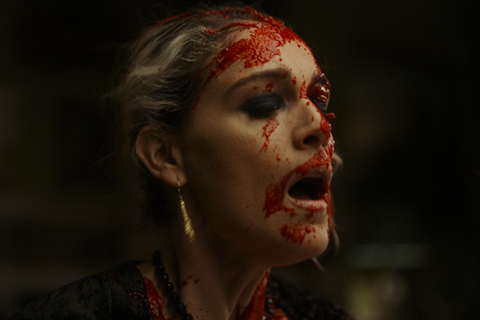 The 75th edition of the Edinburgh International Film Festival (EIFF) has unveiled its line-up, including the world premieres of Josh Appignanesi and Devorah Baum’s documentary Husband and Will Anderson and Ainslie Henderson’s animated feature A Cat Called Dom, and the UK premiere of Peter Strickland’s Flux Gourmet.

Taking place from August 12-20, the edition marks the festival’s return to August for the first time since 2009.  It is also the first under the creative leadership of Kristy Matheson and the first to feature the all-new Powell and Pressburger Award, replacing the Michael Powell Award for best British feature, as part of the festival’s renewed commitment to internationalism.

The programme consists of 87 feature films across five strands, with 12 world premieres and 10 films competing for the Powell and Pressburger Award - a section comprised of over 50% female directors or co-directors. The themes of the stands are: the conversation: cinema to get you talking; the chamber: quality arthouse for the culturally curious; heartbreakers: friends, family, lovers, and cheaters; night moves: cult, music, late night thrills; and postcards from the edge: bold visions to expand horizons.

Appiganesi and Baum’s Husband is in the running for the Powell and Pressburger Award. Baum, associate professor in English Literature at the University of Southampton, is also the subject of the film. It follows an angst-riddled journey to New York, where she is to give a reading from her new book, with an appearance from author Zadie Smith.

Scroll down for the full Powell and Pressburger Award line-up

Also world premiering in this section is A Cat Called Dom, a documentary from Scottish animators Anderson and Henderson, who also star. It follows Anderson as he deals with the grief of his mother’s cancer. The duo work on their animations while facing the frustrations of trying to make this documentary.

Following its Berlin premiere, Strickland’s absurdist drama Flux Gourmet receives its UK premiere and competes for the Powell and Pressburger Award. Set amid a four-week sonic catering residency, in which an artist collective begins to turn on one another. Asa Butterfield, Gwendoline Christie, Ariane Labed, Fatma Mohammed and Makis Papadimitriou star.

Further world premieres not competing for the Powell and Pressburger Award areThe Narrow Road, a drama from Hong Kong set in the early days of the pandemic and directed by Lam Sum, plus Borja Alcade Rubio’s directorial debut The Sacred Family, a Spanish-language UK documentary that follows a family living in the Sacred Valley of the Incas in Peru, both premiering as part of the festival’s ‘heartbreakers’ strand, which also includes the UK debut of Li Ruijun’s Berlinale title Return To Dust.

Heading West: A Story About A Band Called Shooglenifty is a documentary about the Celtic fusion band Shooglenifty, following their journey from formation in Edinburgh in 1990 and directed by Don Coutts, and playing in the ‘night moves’ section. Also in this strand is Neon Spring, a coming-of-age drama set in the Latvian rave scene, directed by Matiss Kaza.

Winners of the EIFF 2019 Works in Progress award, documentarians Hannah Congdon and Catherine Haigh, are the first women to drive the entirety of Central Asia’s Pamir Highway. They document their journey in their film Women Behind The Wheel, which world premieres in ‘the conversation’ section.

In ‘the chamber’ the world premieres are Jon Sanders’ A Clever Woman, following two sisters as they unravel the legacy of their poet mother; Dùthchas, a Scots Gaelic-language title form Andy Mackinnon and Kirsty MacDonald, celebrating the community and culture of Berneray in the Outer Hebrides; The Ballad Of A Great Disordered Heart, a documentary collaboration from Aidan O’Rourke, Becky Manson and Mark Cousins, about Edinburgh’s Old Town and the communities who have called it home; and Winners, a Farsi-language drama set in a small Iranian town, where a child strikes gold by finding an unclaimed Oscar statue.

‘Postcards from the edge’ features the world premiere of Dream Agency, the debut feature from Forest Fringe, an organisation run by artists Andy Field and Deborah Pearson. This UK feature follows a woman as she travels to an island to use the services of an agency that re-enacts people’s dreams.

As previously announced, EIFF will open with Charlotte Wells’ Aftersun and close with Kogonada’s After Yang. The European premiere of Armağan Ballantyne’s Nude Tuesday will be the festival’s inaugural central gala (August 16). Jermaine Clement stars in the Australia-New Zealand comedy, written by Julia Davis, about an unhappily married couple who travel to a New Age wilderness retreat.

The industry programme will be announced at the end of July or early August. EIFF runs from August 12-20.