Pawel Pawlikowski’s Polish nun drama adds to a growing haul of prizes. Other winners include Starred Up and Of Horses and Men 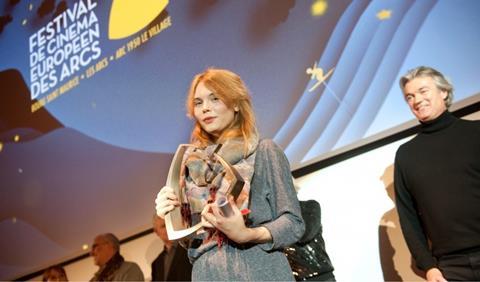 The Best Actress Prize was jointly awarded to Ida’s Agata Trzebuchowska and Agata Kulesza. Trzebuchowska, who plays the titular role, collected the trophy at the awards ceremony

They are the latest in a string of top awards for the film, directed by Paweł Pawlikowski, which tells the story of a novitiate nun in 1960s Poland who is on the verge of taking her vows when she discovers a dark family secret dating back to the Nazi occupation.

It marks the first Polish-language film for Warsaw-born British filmmaker Pawlikowski, best known for The Last Resort and BAFTA-award winning My Summer of Love.

The film has picked up prizes at festivals around the world including Toronto’s FIPRESCI International Critics’ Award; best film at the BFI London Film Festival; the top prize at Poland’s Gdynia Film Festival; and the City of Warsaw Grand Prix at the Warsaw Film Festival.

The Jury Grand Prize was awarded to Of Horses and Men, directed by Benedikt Erlingsson, Iceland’s submission for the Best Foreign Language Oscar. The film also won the prize for Best Music, composed by David Thor Jonsson.

Best Cinematography was given to Pau Esteve Birba for his work on Spanish film Canibal, directed by Manuel Martin Cuenca.

The Young Jury Prize, awarded by students from nearby Bourg Saint Maurice, Albertville and Chambery, was given to Hungarian film The Notebook, directed by Janos Szasz. The film’s producer, Marc Irmer, won the European Ski Cup at the festival earlier in the week.

For the first time, a Press Prize, awarded by a jury of four journalists from Metronews, Studiocinélive, Tess Magazine and Ciné+, was given to Swedish film We Are the Best! by Lukas Moodysson.

The journalists also gave a special mention to Starred Up.

The Cineuropa Prize was given to Slovenian film Class Enemy, by Rok Bicek.

The festival, which opened with Arnaud and Jean-Marie Larrieu’s French thriller Love Is the Perfect Crime, closes today with repeat screenings of competition winners Ida, Of Horses and Men, Starred Up, I Am Yours and We Are the Best!.

Earlier in the festival, which champions independent European cinema, the inaugural Femme du Cinema prize was awarded to Jasmila Zbanic, the Bosnian director of For Those Who Can Tell No Tales and Berlinale winner Grbavica.

The event’s Paris-based co-founders Pierre-Emmanuel Fleurantin and Guillaume Calop, who both hail from Les Arcs, oversaw the festival’s biggest year to date, playing more than 90 films and reaching a record 15,000 admissions.

On the industry side, submissions for the Arc 1950 Co-Production Village were up from 160 last year to 250 for the 2013 selection, of which 28 were cherry-picked by Les Arcs head of industry Vanja Kaludjercic, who also heads up Paris Project.

Kaludjercic said meetings were up by 100 on last year.

The Work-In-Progress screenings were won by Vuk Rsumovic’s Serbian “wolf boy” film, No One’s Child, picking up the inaugural Digimage Classics Awards, which comprises services valued up to $8,300 (€6,000).

This year’s country focus was on the cinema of the former Yugoslavia and directors Danis Tanovic, Jasmila Zbanic and Srdan Golubovic discussed the struggles facing filmmaking in Bosnia and Serbia.

As in previous years, Les Arcs hosted the DIRE days (December 17-21) organised by the independent French distributors network, during which each of the members will screen an upcoming release to exhibitors and discuss the challenges behind releasing European films in France.

The surprise screening at the DIRE days was Lars von Trier’s Nymphomaniac, distributed by France by Films du Losange and attended by Zentropa producer Peter Aalbaek Jensen, who participated in a discussion on film finance in Europe at the festival.