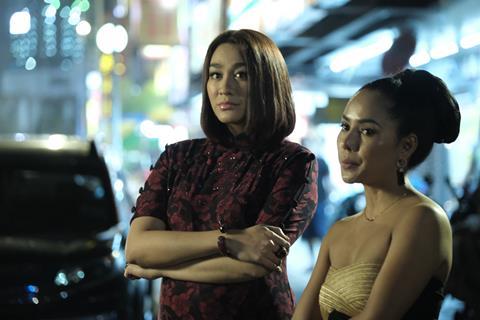 Pan-Asian streaming platform iflix has unveiled details of a slate of five new original productions to start streaming in coming months, headed by Rise To Power, a movie spin-off from its KL Gangster Underworld series.

Directed by Faisal Ishak and Syafiq Yusof, who directed the first season of KL Gangster Underworld, the film stars Dynas Mokhtar, reprising her role as the only woman to fight her way to the top of a ruthless Kuala Lumpur gang.

In addition, iflix is producing a four-part romantic drama miniseries, Ombak Rindu, adapted from a trio of books written by Fauziah Ansari. The first book in the trilogy has already been adapted into a hit movie, Ombak Rindu (2011), directed by Osman Ali. Iflix is working with production partner Infinitus Entertainment to produce a miniseries based on the second and third books.

Osman Ali is returning to direct the miniseries with a cast that includes Remy Ishak, Izara Aishah and Datin Diana Danielle.

Iflix is also making its first foray into the horror genre with a six-part series, Kisah Tanah Jawa, based on a popular collection of books. Co-produced with Indonesia’s Rapi Films, the series tells the story of Andi and Babon on an ill-fated quest to find their friend who has gone missing on a hike in the mountains.

Indonesia’s Screenplay Films is co-producing the series, which “will combine the ever-popular teen drama with the country’s top movie genre, in ways never before seen on the small screen due to local TV censorship guidelines”.