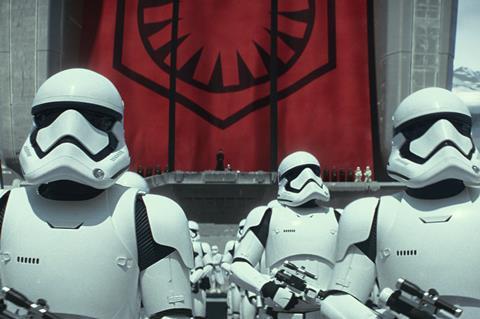 During an interview for BBC Radio4 this morning, Boyega was asked whether the royals were given lines in the film during cameos as Stormtroopers:

“I think they took that scene out”, he deadpanned.

“I’ve had enough with those secrets,” he laughed. “They came on set. They were there. I’m sick of hiding it. I think it was leaked, anyway. There were images. Every time I get asked, I have to dodge it. I’m tired of dodging it. They were there. Tom Hardy was there too.”

The princes visited the Pinewood set in mid-April of last year.

At the time, The Daily Mail quoted a source who claimed that the princes “filmed a scene in which Rey and Finn infiltrate a secret base. The rebel characters are in a lift with Benicio del Toro’s character when a group of Stormtroopers enter – two of whom are William and Harry.”

Earlier this year singer Gary Barlow confirmed that he was given a cameo in The Last Jedi, which will be released in December. Tom Hardy has intimated the same.

This wouldn’t be the first time big names have been given cameo roles in the franchise. James Bond star Daniel Craig had a cameo in The Force Awakens, in which he was listed as Stormtrooper JB-007 in a nod to his secret agent credentials.

Boyega also discussed the strong and “uncomfortable” reactions to his new movie Detroit, which he said was even more timely given last week’s events in Charlottesville.

The Kathryn Bigelow-directed film charts the 1967 Detroit riots during which three young African American men were murdered at the Algiers Motel.

“It has been interesting to see that people are in denial about what happened,” he said of reactions to test screenings. “‘It couldn’t have been like that,’ people said”.

“The black experience is very unique,” he continued. “Sometimes it’s like speaking Chinese explaining it to people who don’t understand it. Perspective is important: see the world through someone else’s eyes. The movie forces you to do that. That’s why you get these reactions, it’s uncomfortable. Once you comprehend the issues then you realise that, yes, people do feel marginalised because of their background or the colour of their skin.”

The actor went on to say that the UK industry needed to do more to increase the diversity of stories about black and urban communities on screen:

“We’ve had a huge amount of movies about gangs and knife crime. That’s not all that black people or those who come from urban communities are about. There needs to be a variety of stories told from the UK.”