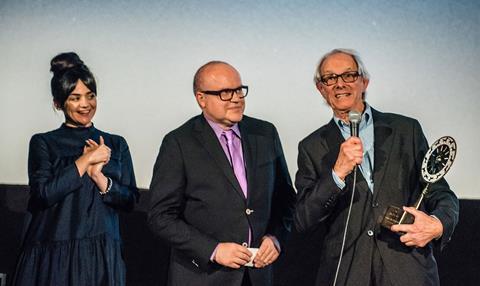 I, Daniel Blake director Ken Loach and actress Hayley Squires were in Ghent, Belgium last night (Oct 11) for the opening of the 43rd Film Fest Gent.

Loach, tireless at age 80, passionately introduced his Palme d’Or winning drama five times in five separate cinema screens at the Kinepolis multiplex. Loach said, “This is a story we needed to share. It is in a sense about how we choose to live together.”

The veteran director also held a Q&A away from the red carpet, at a public screening at the Vooruit, a venue that has long been associated with socialist causes, where the audience gave him a lengthy standing ovation.

Festival artistic director Patrick Duynslaegher said he wanted to open the festival with I, Daniel Blake because it offered a shared artistic experience “without excluding social and political relevance.”

Loach was also presented with the Jozef Plateau Honorary Award for his special contribution to the art of filmmaking.

Special programmes this year include a focus on Nordic cinema and a spotlight on Japan. The Belgian Cinema Today programme presents a range of local cinema and TV.

Ghent also hosts the 16th World Soundtrack Awards on Oct 19-20. An Oct 20 concert with the theme ‘scoring for television’ will include honorary guest Ryuichi Sakamoto, who receives a lifetime achievement award. Sakamoto and American composers Jeff Beal and Jeff Russo will also take part in a film music seminar.