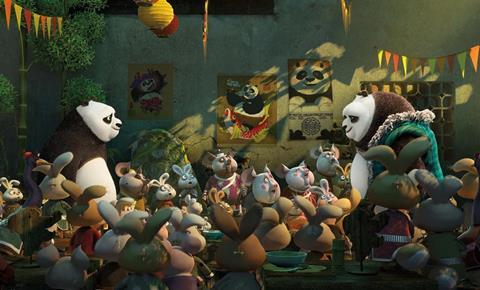 Despite a 43% drop (excluding previews), Kung Fu Panda 3 retained its grip on top spot at the UK box office.

Fox’s threequel chopped its way to an extra non-final $2.5m (£1.74m) for $10.2m (£7.1m) to date. Though direct competition arrives this week in the form of Disney’s Zootropolis, it should still prosper over the Easter school holidays.

10 Cloverfield Lane couldn’t quite match its impressive domestic opening as it charted second.

Though it won’t be counted officially in this week’s chart, Disney’s Zootropolis has banked a auspicious $1.9m (£1.3m) in previews this weekend from its 553 sites.

London Has Fallen remained in third as it posted the lowest drop of the top ten.

eOne’s continuation of the young adult franchise stands at $4.6m (£3.19m) after 11 days in play, and it now faces a struggle to avoid becoming the lowest-grossing outing of the series to date.

It missed out on being director William Brent Bell’s best UK debut, but did at least win the mini-battle of the horrors headlined by The Walking Dead stars, topping The Other Side Of The Door’s $379,000 (£262,955) debut from 335 sites.

Studiocanal’s release of Ben Wheatley’s latest film recorded the highest site average of the week at $5,084 (£3,536), a promising start for a tricky film.

High-Rise will soon become Wheatley’s best-ever UK performer, currently Sightseers’ $951,000 (£661,077), although it’s worth noting that it’s received the widest release of any of Wheatley’s films.

As expected, it is now the Coen Brothers’ fifth best UK performer, but it’ll need a boost to overtake their fourth best, currently Intolerable Cruelty, which scored a $9.5m (£6.62m) result.

Soda Pictures’ Disorder, Dogwoof’s Speed Sisters and Vertigo Releasing’s Welcome To Me are among the films receiving a limited release.