It’s a Universal one-two at the top of the chart as Jurassic World becomes year’s biggest film with $76.8m (£48.9m) haul to date. 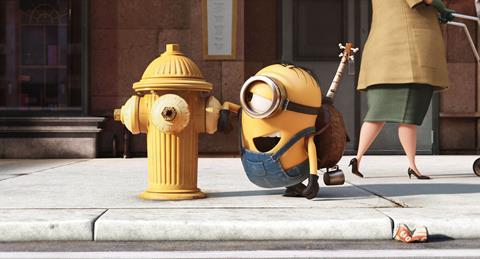 Defying the good weather, Minions posted the fifth biggest opening of the year as it debuted top of the UK box office.

Universal’s animation spin-off from the popular Despicable Me series grossed a superb $18.1m (£11.6m) from its 573 sites, meaning that the distributor now boasts four of the five biggest openings of the year to date.

The result means Minions has recorded the biggest ever three-day opening for an animation in the UK.

Minions will now look to try and challenge Despicable Me 2’s $74.3m (£47.3m) UK result, and could be aided by a relatively clear run at the family market until the arrival of Disney’s Inside Out on July 24.

In the coming days, Jurassic World will also become the first film since The Hobbit: An Unexpected Journey to cross the £50m mark in the UK.

Slow West could post decent numbers midweek given its older-skewing audience, but it may be hit by the predicted good weather this week.

Figures for The Look of Silence are still to be confirmed.

Metrodome’s Housebound, Soda Pictures’ Still the Water and BFI’s Magician: The Life and Work of Orson Welles are among the films receiving a limited release.