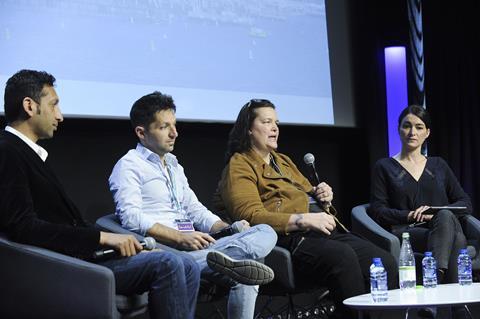 Blockchain is one of the next big disrupters on the horizon for the content industry, but introducing it into the financing, distribution and remuneration chain is still a work in progress, three experts told a MIPTV panel this week.

The discussion comes amid growing activity around the technology in the film and TV world, with the first blockchain movie release recently announced for Jeremy Culver’s romantic comedy No Postage Necessary.

Ashley Turing, CEO of London-based LiveTree ADEPT said the encrypted ledger system, initially created to monitor Bitcoin transactions, would end up touching every aspect of life in the future.

“Blockchain is here to stay. It’s not going away. It’s going to evolve. It’s going to become a part of every part of our lives much like the internet has weaved itself into our daily functions,” he said.

LiveTree ADEPT, which was created two years ago with an initial focus on crowdfunding, is billed as one of the world’s first blockchain film and TV rights funding and distribution platforms.

Current projects on the platform include Christopher Arcella film Decentralized, which is described on the site as “an entertaining film that uses the power of storytelling to educate viewer about Bitcoin and blockchain technology”.

The film, starring Amari Cheatom in the lead role, will shoot this summer in New York and will act as a pilot episode for a potential anthology series.

Early blockchain adopters in the entertainment industry believe the technology will enable creators to connect directly with potential consumers and fans, rather than through a third-party platform such as YouTube or a distributor.

“This is the first time in human history that we’ve been able to make a transaction without the need of a third party and that is an exciting part of the DNA of the technology itself,” said Turing.

Potentially, entertainment-skewed blockchain networks will allow creators to register their content - whether it be at the project stage or completed - and then track all the transactions taking place around it throughout its lifetime, enabling them to reap any benefits directly without third parties controlling the fan-base or taking a cut. Whether this comes to pass remains to be seen.

The veteran Hollywood marketing guru, who first made her name engineering the innovative promotional campaign for The Blair Witch Project in 2000, said the vision for TREETI was for it to be a curated and collaborative platform that helped filmmakers from around the world get their films made as well as connected to viewers.

She said it would provide instant payment and revenue, either through cryptocurrency or US dollars; ownership of data, crowd-funding support and sometimes “soulful engagement with the fans.”

For Jones, filmmaker interaction with viewers/consumers is an important aspect of the TREETI model.

“The idea is to push the curtain back on Hollywood, to give people direct access to the filmmaker, creating a festival like atmosphere,” she said.

In a move signalling TREETI’s commitment to the global independent film scene, the blockchain network announced a partnership with the Independent Filmmaker Project (IFP) last week, under which will it work with participants on a number of its programmes over the next 12 years.

Jones told Screen after the panel that she and her team were flying to New York after MIPTV to nail down the details of the collaboration, before returning to Cannes in May for another round of meetings and announcements at the film festival.

Flixxo – the third blockchain initiative spotlighted in the panel – revolved around yet another model.

The fledgling network aims to foster direct interaction between creators, users and advertisers through a credit system using digital tokens called Flixx. Under the scheme, advertisers buy Flixx from content producers and then pay viewers for a moment of their time.

“I’ve heard YouTubers talk about how they build beautiful houses on land rented from somebody else. When they leave the platform, they leave their followers within the platform,” said Adrian Garelik, CEO of the Gibraltar-based start-up.

“Today all the content is relying on three platforms: Google, Facebook and Amazon, or Netflix before Amazon, so the only way to fight against this is to create a new ecosystem to distribute content.”

Garelik cautioned, however, that the use of blockchain in the content industry was still at an early stage and that there would be necessary missteps along the way.

“We’re moving from the internet of things to the internet of value. It’s a unique opportunity and a unique moment but you need to play, to take an empirical approach and be prepared for the fact that at times we’re going to screw things up.”