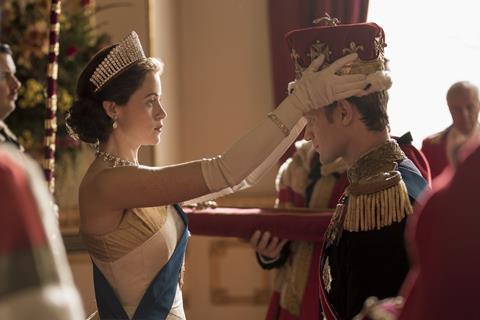 Claire Foy as Queen Elizabeth II and Matt Smith as Philip, Duke of Edinburgh in season two of ‘The Crown’

Netflix fell short of its subscriber growth targets in its second quarter, adding 5.2m memberships around the world instead of the 6.2m the streaming giant had predicted.

In what the company described as “a strong but not stellar” quarter, Netflix saw its global subscriber total climb to 130.1m over the three months ending June 30, with 57.4m in the US and 72.8m in international markets.

The failure to meet subscriber growth targets caused a drop of more than 10% in Netflix’s stock price.

In its letter to shareholders, Netflix highlighted its showing in last week’s Emmy nominations, when the streamer scored the most nods among all US outlets, ending HBO’s 17-year run at the top of the nominations table.

The streaming giant also said it is “making good progress with our original feature films. As traditional exhibition focuses increasingly on superheroes and sequels, our on demand service allows us to serve a wide variety of tastes.”

Netflix said romantic comedies such as Set It Up and The Kissing Booth “have been watched and loved by tens of millions of Netflix members and the young stars of these films have seen their social media followings grow from a few thousand into the millions in the weeks following release.”