The non-profit organisation is Belgium-based with 11 founding members from the UK, Poland, Germany, Belgium and France. 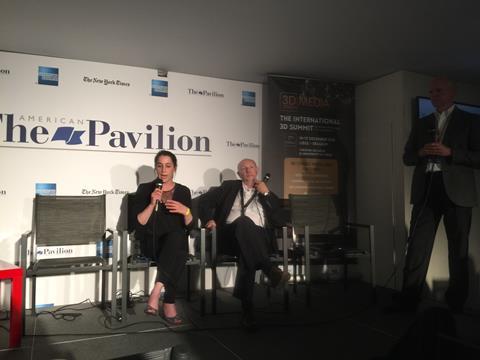 The creation of a new 3D Guild was announced today in a panel at the American Pavilion in Cannes. The non-profit organisation is Belgium-based with 11 founding members from the UK, Poland, Germany, Belgium and France.

Jacques Verly, President of the 3D Guild, said it is “for people involved in all 3D aspects including film and television, virtual reality and gaming - as well as people from around the world interested in the imaging form.”

He continued, “If this takes off, we will have a strong global network where people can network, arrange events and ask questions. This is in our mind the glue for all people passionate in 3d.”

A 3D Guild Award was also announced, and will be given out at an awards ceremony on December 17.

“When the heads of studios show new emerging technologies like high dynamic range – this is what most thrills film-makers and cinematographers.

“It is the one technology that audiences will notice immediately – like transporting them on a journey. I don’t know another form of technology, since the birth of 3D, that has made people so excited.”

Issues were also raised about the quality of 3D, particularly in high-action films.

Josephine Derobe, a stereographer, explained, “If you want to go fast with your movements, you can. If you want to move a bit slower in speed, then you can become more immersive in your technique. You just need an expert to advise you exactly what you need to do.”

Native 3D vs conversion was another factor addressed, with one producer asking if there was one preferred method on bigger budget films.

“You can make good 3D - native or converted,” said Chabin. “Certainly native can be faster and cheaper, but you need the right team. Movies like X Men and Transformers took an attitude of shooting hybrid, while other action films prefer shooting 2d and converting to 3D for post production and VFX purposes.

He cited 20th Century Fox’s upcoming The Martian starring Matt Damon as an alternative example, that was shot 95% in 3D.

“It’s like different lighting packages and lenses. It’s really up to what you prefer. If you’re worried about dust particles and explosions, like Mad Max, I think film-makers prefer conversion. And since conversion costs are coming down - $200,000 a minute in 2009 compared to today’s $15,000 - $25,000 a minute - it’s much easier to do now.

Concluding with a statistic, Chabin estimated that 75% of last year’s animated films were converted – or made 3D from computers.

Jacques Verly reminds these are the types of discussions that can be discussed through the 3D Guild.