In one of the most provocative Hall H panels in a long time, Snowden director Oliver Stone on his debut took part in a far-ranging conversation about patriotism, surveillance, Pokemon Go and an appreciation of the man who inspired his latest film. 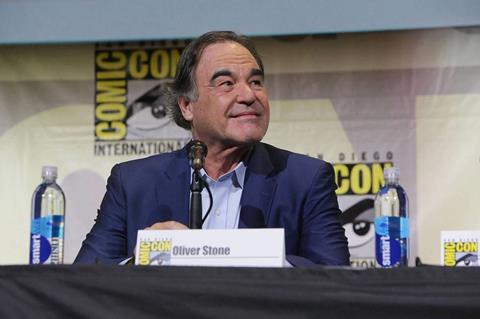 “Snowden is a larger than life story on what’s happening right now under out noses and continuing to happen and it affects the majority of you, this audience, and into the next generation,” said the filmmaker.

“He’s still a mystery,” Stone said of Edward Snowden, the National Security Administration (NSA) whistleblower whose sensational 2013 leaks revealed the extent of US and global government surveillance programmes. “We went as far as we could.”

The filmmaker based Snowden on original interviews and two books: Guardian journalist Luke Harding’s The Snowden Files: The Inside Story Of The World’s Most Wanted Man, and Time Of The Octopus, a “fictionalisation” by Snowden’s Russian lawyer Anatoly Kucherena.

Stone told the session that started late on Thursday morning how in January 2014 he met Snowden living under asylum in Moscow. “Over the course of that and three other meetings until May it was a cat-and-mouse process. He wasn’t that interested in a movie. It came together in May/June and we went to work later that year.”

Every studio passed. “Every corporate board that runs a studio – more than the studio – said no,” said Stone, adding that financing came from Germany and France, with international sales [via Wild Bunch].

He introduced a new trailer to the Hall H faithful that Open Road released shortly afterwards. The film will screen on Thursday night to an invite-only audience, when Snowden himself is expected to take part in a Q&A via satellite from Moscow. The distributor has set a September 16 US release for what must be a surefire autumn festival selection.

When asked if he shot outside the US in Munich because he was concerned there would be surveillance of the film, Stone said his longtime producer Moritz Borman wanted to shoot in Germany because of subsidies. “The Germans have a lot of respect for privacy.”

To the point about surveillance of the filming process he replied: “I don’t know and neither do you.”

The youth of the protagonists in the story and the overarching implications of NSA behaviour and surveillance by other governments was not lost on the director or the three lead actors who joined him on stage.

“This is your world and to be in a movie that reflects that back… is an amazing feeling,” said Zachary Quinto, who plays the investigative journalist Glenn Greenwald, who was among the team of international reporters across the world who initially broke the Snowden leaks.

‘We sat and talked for hours’

Joseph Gordon-Levitt, who donated his acting fee to the ACLU and a joint campaign between the ACLU and his online collaborative production company HITRECORD, spoke of the challenge of playing Snowden and repeatedly stressed the dangers of over-simplifying people and issues.

“We sat and talked for hours,” he said. “I wanted to get to know him as a person. He’s very polite… really warm and an optimist.

“He is actually extremely optimistic about technology and the future and how technology can improve democracy.”

Gordon-Levitt added later: “We’re promised privacy in the Constitution and if the government wants to change that they have to be open about that… the problem is those changes were not made in the open and the rules were broken in secret.”

At one point the actor, wearing a stars and stripes T-shirt, turned to Stone and said: “I think I am sitting next to one of the most patriotic filmmakers in the history of American cinema.”

Stone had been impressed when he saw Shailene Woodley in the summer 2014 breakout 2014 The Fault In Our Stars and recalled a heartfelt letter from the actress asking to play Snowden’s girlfriend Lindsay Mills. “She came to the movie and brought that abundance of emotion and I am very grateful for it.”

Returning to the themes of the film, Stone said Snowden had told him the film was a seed and that “more people than you would think” in the NSA are considering their stance of surveillance.

During the Q&A segment, the filmmaker used the phrase “surveillance capitalism” after the panel was asked to comment on the mobile gaming sensation Pokemon Go.

Stone called the game “a new level of invasion” and went on to comment broadly on the practice of data mining by Google and other companies.

“You will see a new form of robot society where they will know how you behave and lead you into a new way of behaviour. It’s what they call totalitarianism.”